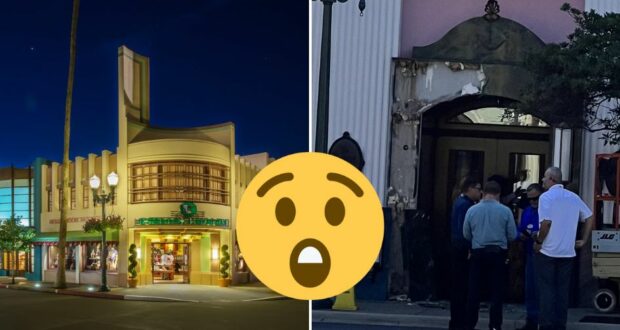 Guests visiting Disney’s Hollywood Studios on Monday, September 26, 2022, were in for a Disney vacation surprise as they noticed a part of a Hollywood Boulevard storefront crumbled on the ground.

But, as Guests entered for Park opening on the morning of September 26, 2022, a piece of a storefront seemingly fell, causing the need to block off and close a large portion of Hollywood Boulevard.

@ozborn82 took to social media to share, “Part of the store front has broken off #disneyworld #HollywoodStudios” with the image below:

The shop pictured, Keystone Clothiers, is located on Hollywood Boulevard at Disney’s Hollywood Studios, across from The Trolley Car Café (AKA Starbucks) and The Hollywood Brown Derby Lounge.

Guests are reporting there are several Cast Members in the area as they have closed off a large portion of Hollywood Boulevard due to the incident.

Why a portion of the storefront has seemingly fallen off is still unclear.

Keystone Clothiers at Disney’s Hollywood Studios is one of the most popular shopping locations in the Disney Park. Currently, the shop features favorites from the 50th Anniversary celebration merchandise lineup, noting:

“Bring home your very own piece of The World’s Most Magical Celebration. To honor the 50th anniversary celebration of Walt Disney World Resort, we are releasing merchandise collections filled with must-have mementos that will bring a smile to Disney fans of all ages!”

We will be sure to keep Disney Tips readers updated as we learn more details about this Disney’s Hollywood Studios incident.

2022-09-26
Jamie Sylvester
Previous: Expect “Rapid Intensification” as Hurricane Ian Aims for Florida
Next: Amazon Is Selling an Exclusive “Rover” From Carousel of Progress