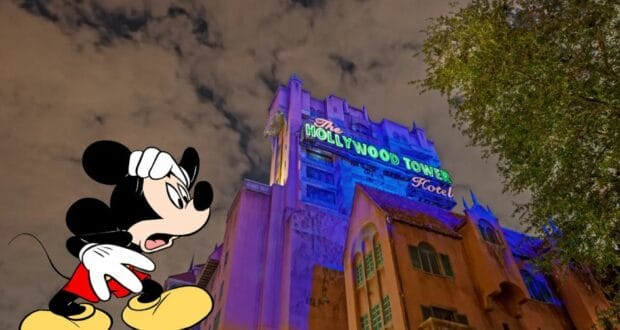 You’ve worked up the courage to ride Walt Disney World Resort’s most ominous attraction, The Twilight Zone Tower of Terror. As the haunted elevator ride looms over Disney’s Hollywood Studios, the chilling screams heard outside can cause goosebumps and cold chills. But, can you imagine staying the night in the Tower of Terror?

RELATED: This Will Happen To You If You’re First In Line at Tower of Terror

First things first… despite the rumors, NO, Guests are currently not allowed to book a night in the Tower of Terror. A TikTok post has gone viral from a satire Disney news page, @mousetrapnews. The video notes, “Are you booking a room in The Tower of Terror? #disneyworld #towerofterror #disneynews #hollywoodstudios”

RELATED: Is Tower of Terror at Walt Disney World Better Than Guardians of the Galaxy at Disney California Adventure?

The hilarious satire video states, “For $1,939, you can spend a night in the Hollywood Tower Hotel.” While a $2,000 per night stay may seem pretty high, we honestly believe several Disney fans would willing to pay that price for this unique experience! The video even states the stay would include access to the “infamous Tip Top Club,” which, no, is not a real club.

With the popularity of Tower of Terror, we understand how this satirical theme park video could go viral with 1.6 million views. Not only has the video fooled Disney fans, but we flash back to April Fools when several Guests believed Tower of Terror was being rethemed to an Encanto attraction.

The closest thing to experiencing a sleepover at the Disney Park Tower of Terror would probably be the ability to rent out the Disney attraction, which some have been known to do for special events such as weddings and receptions. That said, there are no overnight stays that we are aware of.

Disney’s true description of the Tower of Terror includes:

Next Stop: The 5th Dimension: Step uneasily inside the infamous Hollywood Tower Hotel and find a dusty lobby frozen in time. Even the subdued hotel staff seems strangely out of another era.

Suddenly a television set springs to life and Rod Serling welcomes you on a journey into the Twilight Zone. He reveals that on a gloomy Halloween night in 1939, some hotel patrons were riding the elevator when a violent storm struck the building… and they were never seen again. The hotel closed down and has stood empty ever since.

Going Up? Enter the rickety, elevator-style lift, strap yourself in and prepare to discover what lies beyond the darkest corner of your imagination.

Shriek in terror as you’re suddenly propelled up and down the abandoned shaft—unexpectedly dropping and rising—as you hear the sound of cables snapping and metal clanging overhead.

Will you make it back to the real world… or will you become a permanent resident of the Twilight Zone?

Let’s dream a little, shall we? If the Tower of Terror could be rented out for $1,939 per night when visiting Disney World, would you be booking your stay? The only thing creepier might be a stay at Magic Kingdom’s Haunted Mansion!

2022-08-30
Jamie Sylvester
Previous: The Relaxed Disney Evening You Didn’t Know You Needed
Next: Watch the Fireworks From a Coveted Location With This Recently Restored Disney Dining Package