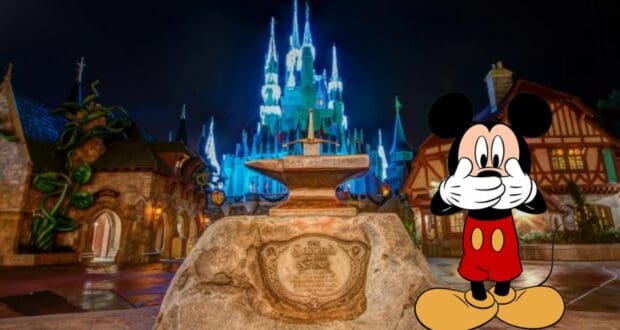 You’re strolling through Magic Kingdom Park, and you see IT! That’s right, it’s the sword in the stone… taunting Guests just steps away from Prince Charming Regal Carrousel. Have you tried multiple times to pull the sword out of the stone with no luck? Well, check out this incredible video where the rare Disney experience happened for one Disney Park Guest.

The Disney animated classic film, The Sword in the Stone (1963), still holds one important role at Walt Disney World Resort. In the film, a sword in a stone has an inscription proclaiming that whoever removes the sword is the rightful King of England. Several try but none succeed in removing the sword until an 11-year-old orphan named Arthur (given the nickname “Wart”) pulls the sword from the stone and becomes King Arthur.

Magic Kingdom Park carries the Disney movie’s sword in the stone as it is featured in Fantasyland, behind Cinderella Castle. Many try to pull the sword out of the stone at Magic Kingdom with no luck. There are, however moments when the sword does come out for a rare and exciting experience for the Disney Park Guest.

One worthy Magic Kingdom Guest was able to pull the sword out of the stone, and it was captured on video! What’s even more incredible is that she could pull it not once but multiple times while others tried their hardest in between her attempts.

@jojocrichton took to social media to share the video below of the worthy Park Guest pulling the sword out of the stone and his failed attempts in between.

So incredible! We too have been worthy enough to pull the sword out of the stone ONE time in all our visits to Magic Kingdom Park. It was one of those especially incredible Disney moments we will never forget.