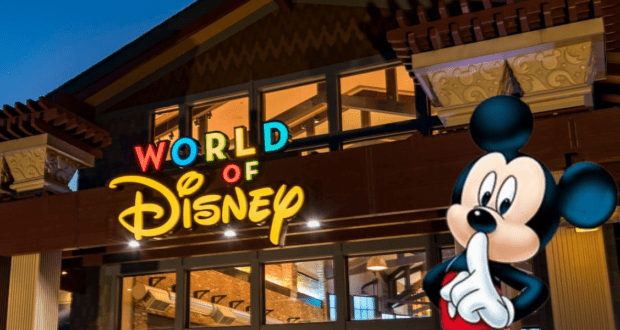 The Secrets of World Of Disney

World of Disney is the world’s largest Disney Store. Located in the Marketplace of Disney Springs, the store has been open since October 2, 1996, and offers a unique shopping experience to Disney Guests.

Once, World of Disney was a store that really did need its own guide map. It was not unusual for Guests to become separated from the rest of their party. Parents even lost their children in the store!

Following the reimagining of Downtown Disney, which is now known as Disney Springs, it was no surprise that World of Disney would be rearranged to allow it to fit seamlessly with its exterior surroundings. The story of the reimagined World of Disney is that the store occupies an abandoned marketplace turned artist studio. Disney animators took over the spot as it provided a perfect space to create. A little later, however, an actual animation studio opened, and so the space was abandoned once again until it was chosen as an ideal retail space. 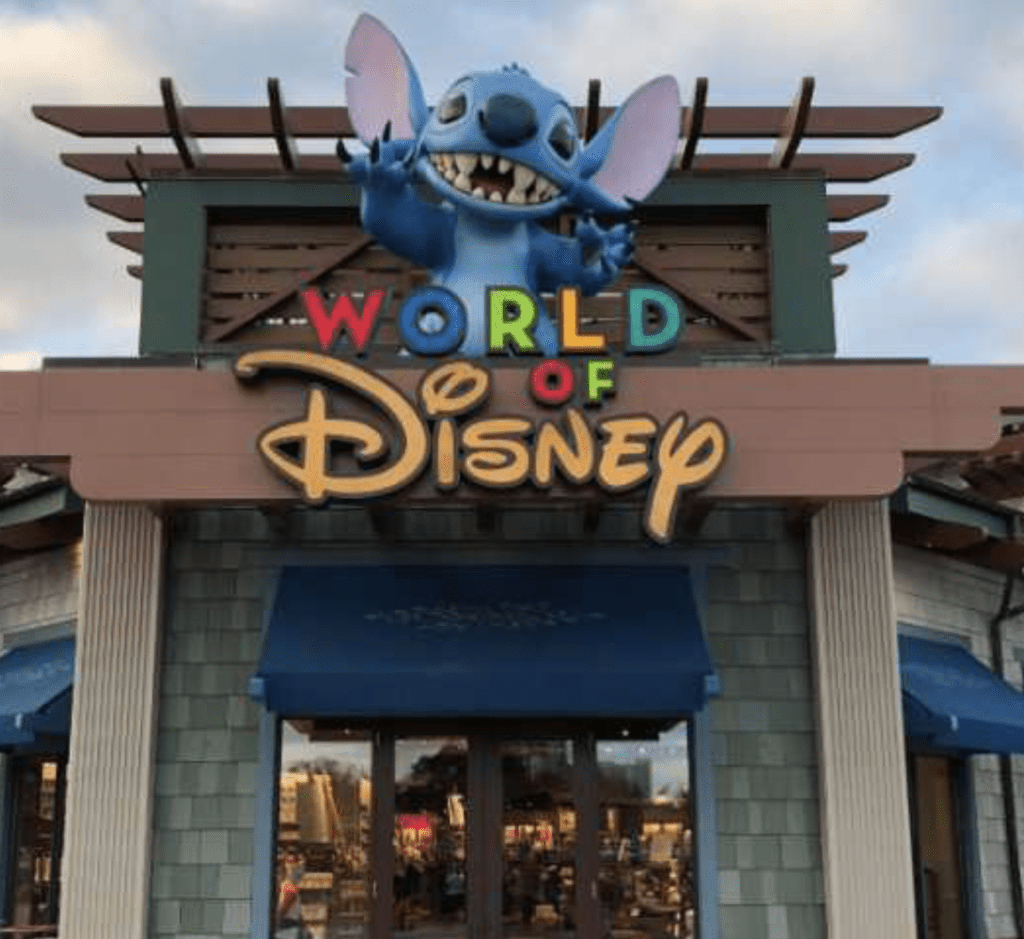 A hot mess of a remodel

It wasn’t until the final stages of the remodel that the store was closed to Guests. Prior to that, parts of the store could be accessed by Guests whilst others were closed for refurbishment. At this time, the store felt very disjointed; the remains of the store that it once was did not match with the new and modern, industrial-style design that the store was transforming into.

In addition, an expansion to the back of the Disney store took place; this added an additional 6,000 square feet of retail space. The extra space also allowed for another entrance to the store to be opened for Guests, allowing access from the rear. 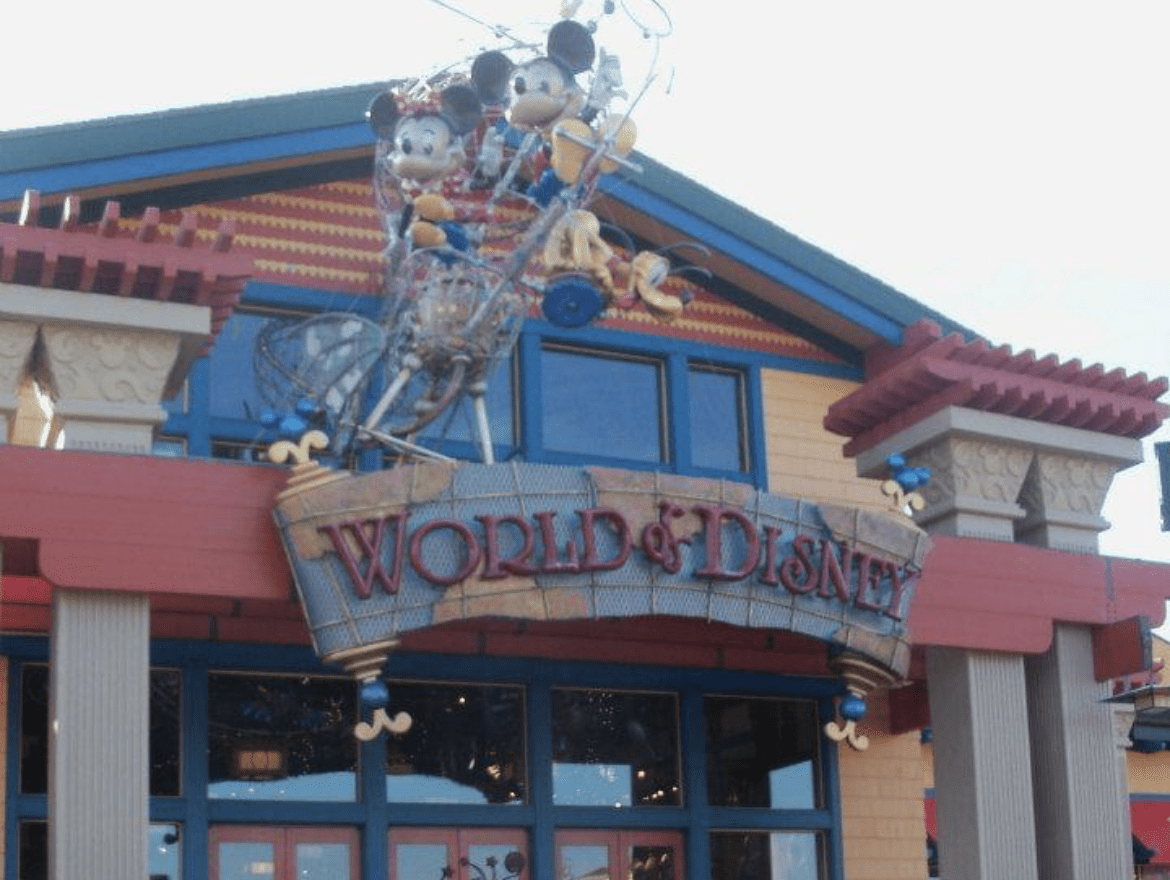 The grand opening of World of Disney at Disney Springs, on October 27, 2018, revealed the incredible transformation that the retail store underwent. Whilst it took some time to reach this point, the wait was worth it when the beautiful store was finally revealed.

The transformation opened the store massively, making it a lot easier to navigate than before. The architectural details aim to guide Guests to different areas. With high ceilings, and windows around the roof, the space has become light and airy. The World of Disney that we now know is a modern and spacious store to visit.

Possibly the most practical feature to come from the remodel of World of Disney though, was access to registers. Previously, Guests had to seek out registers to check out. The remodel brought 2 distinct pay areas that were easy to find and navigate, whilst continuing the magical retail experience that the Walt Disney Company is known for.

In light of the backstory of the building, World of Disney showcases the features that were left by the animators when they moved from the space. 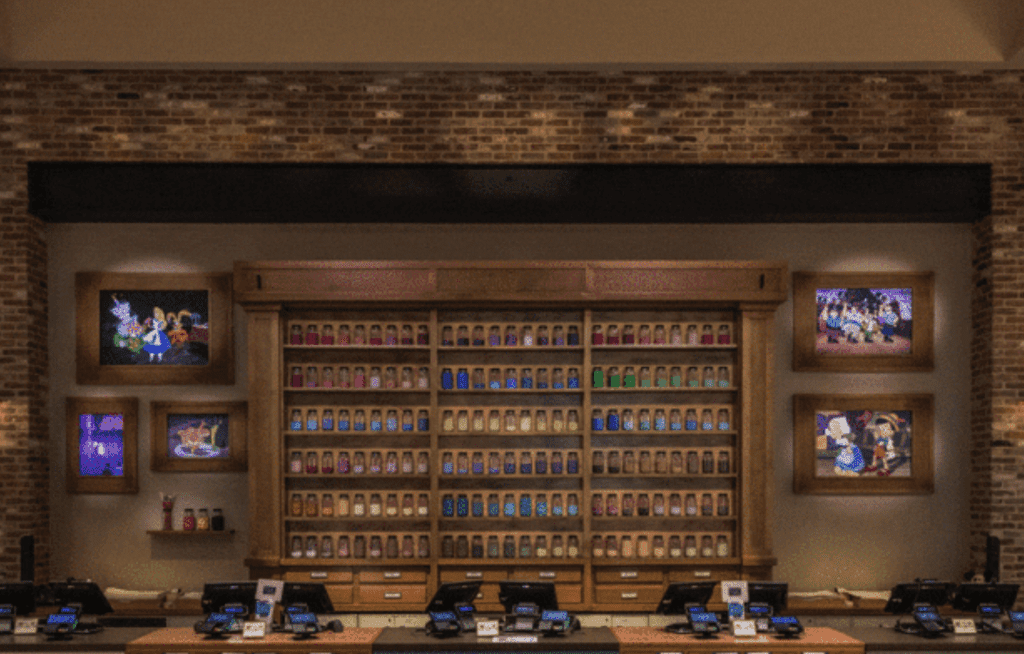 Look around the store and you will find ‘enchanted’ movie posters for favorite Disney films that come to life before your eyes. Pixie dust swirls in colorful jars and turns animation stills into animated movie clips.

Admire the register desks as you pay for your Disney souvenirs, where you will find drawings left by the Disney animators. Don’t forget to look up too! The ceilings have beautiful murals painted on them, and really are a true work of art. 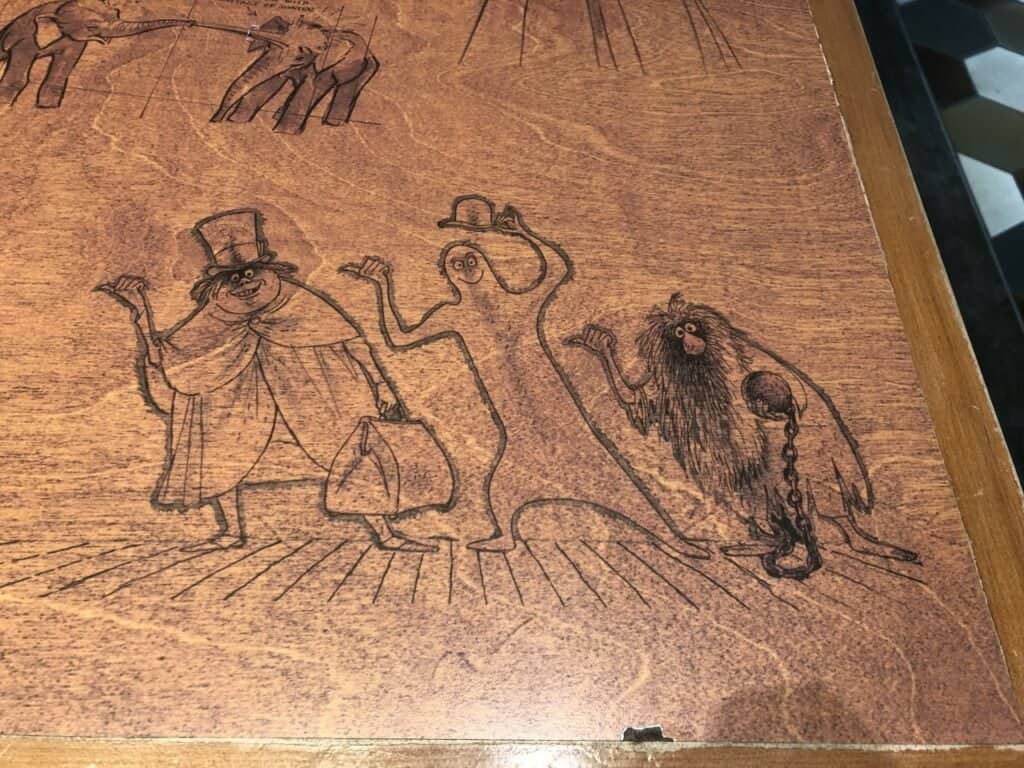 A new costume for Cast Members

With the reimagined store, came a new costume for Cast Members. Previously the World of Disney costume, worn by all Cast Members, included full-length stone-colored pants, and a shirt in green, maroon, blue, and stone colors, displaying the store logo.

The new costume was introduced when the remodeled store opened in Disney Springs in 2018. Now, Cast Members wear a red shirt and black full-length pants – a little more subtle than the previous costume! 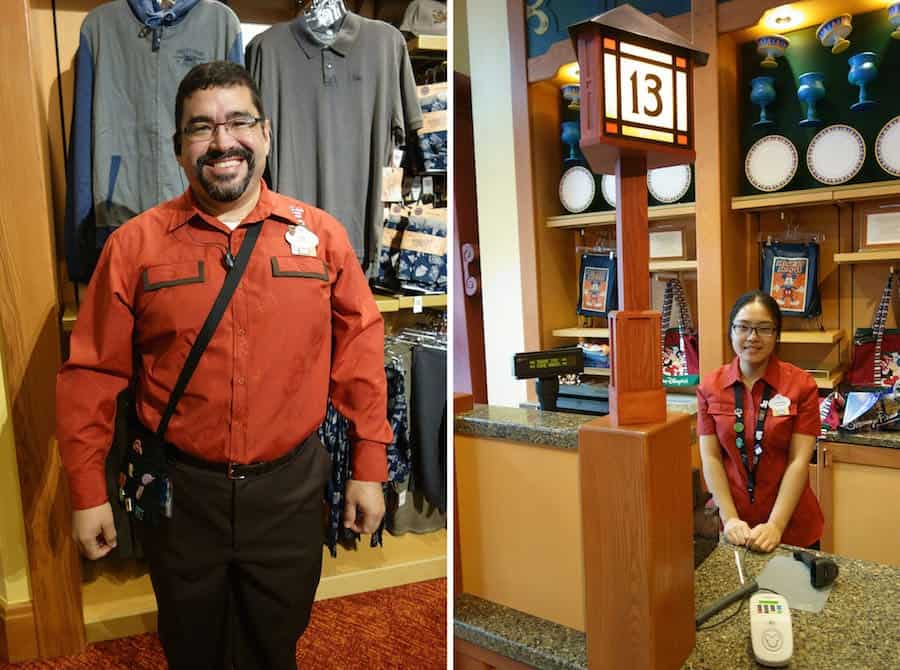 Due to the size of the store, World of Disney in Disney Springs has multiple entrances. Easily located, each entrance features the store’s logo above the door. The logo has been updated to reflect the reimagining of the store, losing the map detailing that used to feature as a background.

If there was one thing we could bring back to the entrances of World of Disney, it would be the other features above the store logo. Remember when Mickey and Minnie welcomed you into the entrance at the center of the store? Or you passed underneath Cinderella’s coach when entering near the Lego Store? It was always fun to stop by Cinderella and Princess Aurora on the way out too! 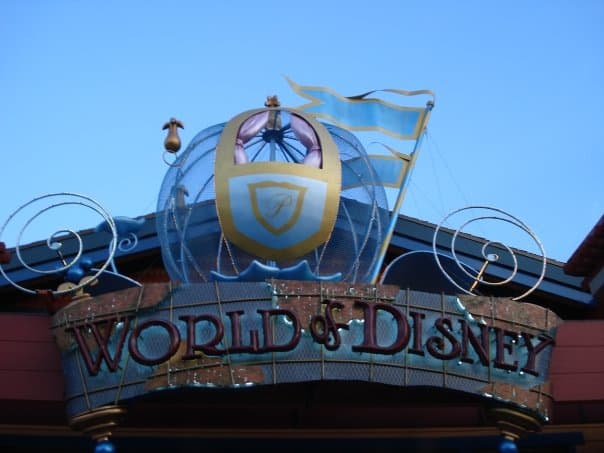 It’s not the only one!

World of Disney in Lake Buena Vista was the first of 4 stores to open with the same name. The store is also the largest of the four, offering 51,000 square feet of retail space for Guests to browse. World of Disney certainly makes The Emporium on Main Street U.S.A. in Magic Kingdom theme park, which covers 17,000 square feet, look very small!

Finally, the newest World of Disney location to have opened was in Disneytown in Shanghai Disney Resort. The store opened on June 14, 2016, along with Shanghai Disneyland.

A secret of World of Disney that only Cast Members know is that the rooms of the store had unique names. Some of the rooms still use these names, but most were used prior to the remodel. The naming of each room made it easy for Cast Members to be directed to work locations. It also made it easy to identify the area of the store where different pieces of merchandise could be found. Here’s the insider scoop on this, coming directly from a past World of Disney Cast Member! 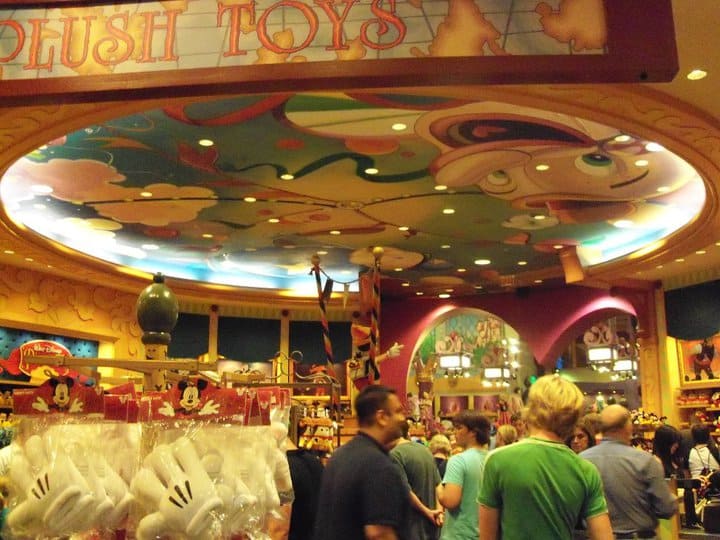 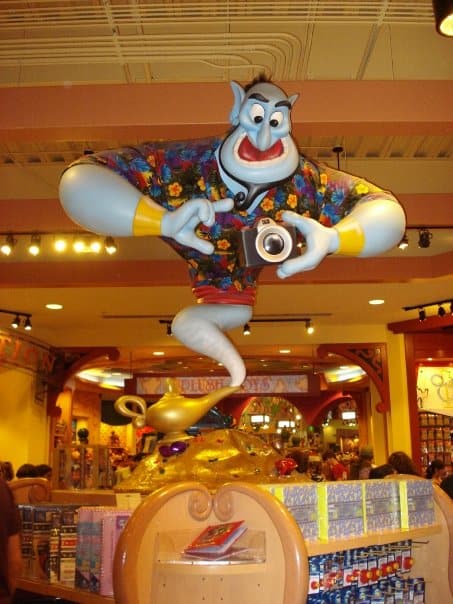 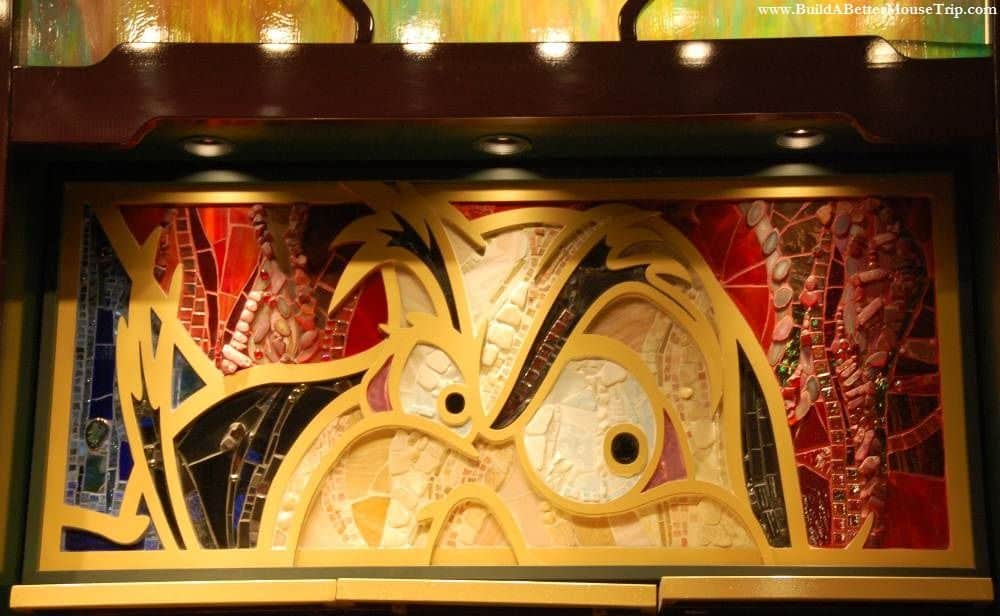 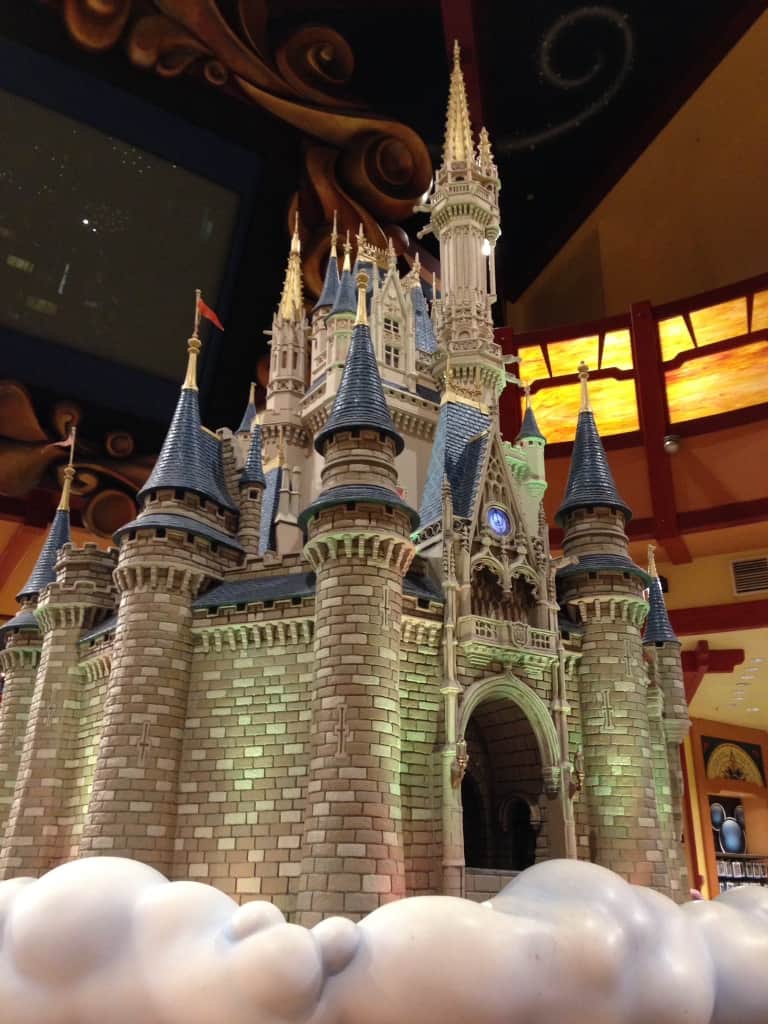 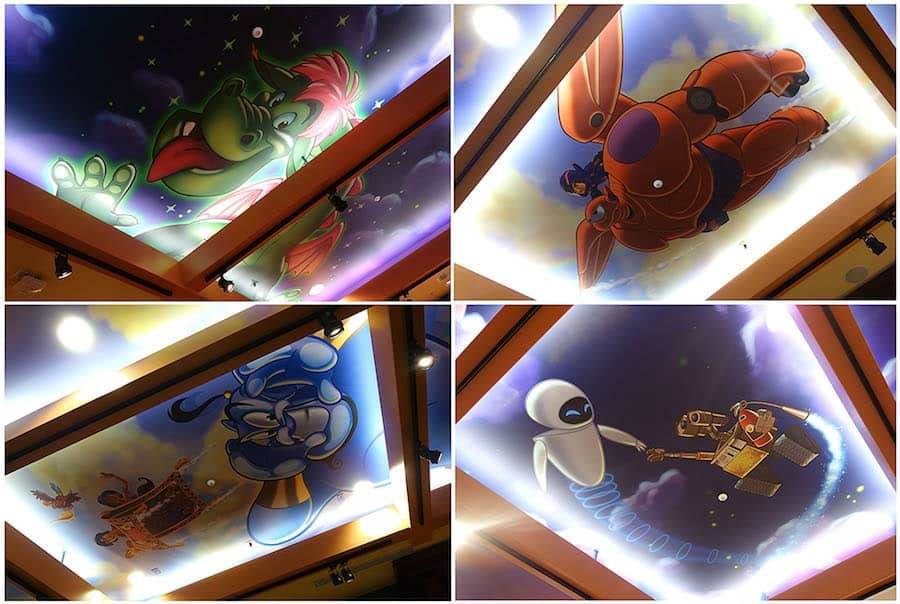 Disney Princesses in a new way

With a store as large as World of Disney, it probably comes as no surprise that there are 3 storerooms required to keep this merchandise location stocked. Two of the rooms are located in the roof space of the Disney store. The other is located to the rear of the ground floor.

Cindy’s, named after Cinderella, is located on the ground floor. This is where packing-related items are kept, including the Disney-famous origami. You’ll know and love this stuff if you are partial to buying Christmas ornaments from Walt Disney World! Cindy’s is also where merchandise packages that Guests collect at their Disney Resort are taken care of.

Belle’s is located above Adventure, EDR, and Magic. This is where clothing items are hung and held, before transferring to the shop floor for Guests to buy. Ariel’s is the final storeroom and is located above Map, Carnival, and Bird. This storeroom holds every other piece of Disney merchandise that is sold at World of Disney. What’s cool about these two storerooms, is that Cast Members used to be able to walk between the magical hangings of Great Hall North and South, to cross from one to the other, without Guests seeing. This offered an incredible view of the store from above! 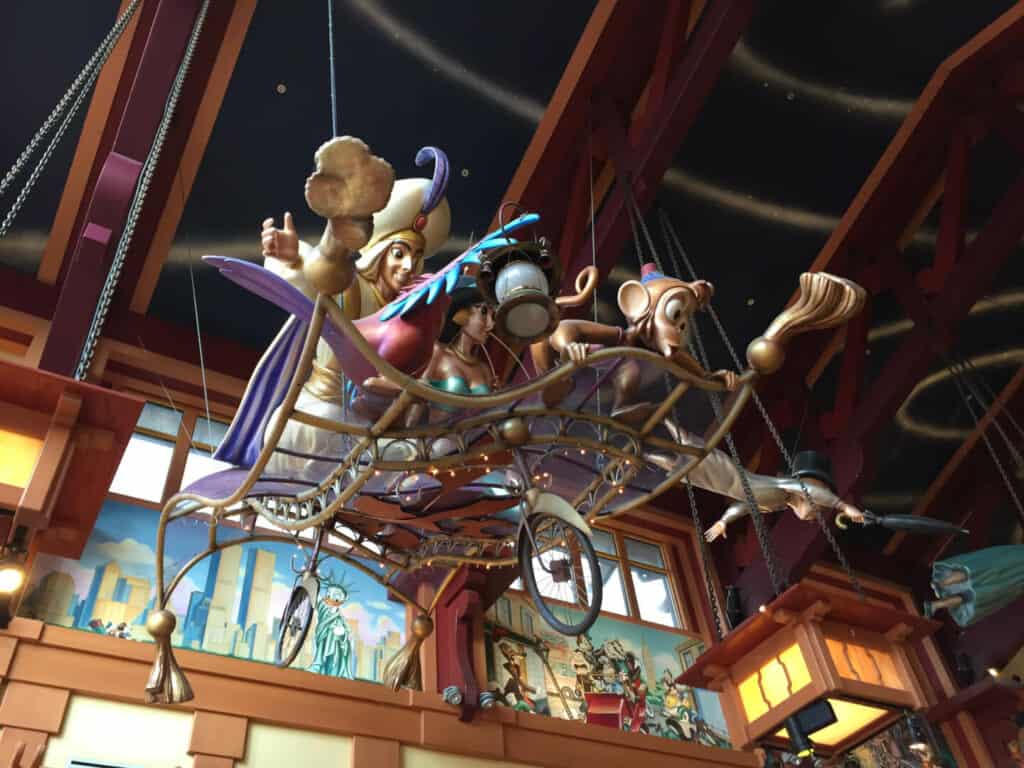 So there you have it – all of the secrets of World of Disney at the Walt Disney World Resort. Next time you’re exploring the Disney Springs Marketplace, look around and admire the wonderful design features of the world’s largest Disney store.

See if you can imagine the different rooms that once were, and can still be deciphered despite the open and easily-navigated store this now is. You certainly won’t want to miss out on passing through this store, even if you don’t intend on buying anything!