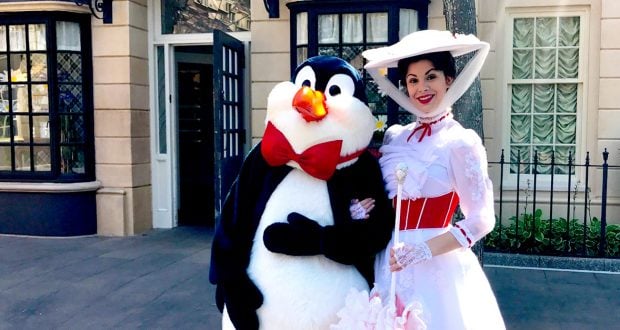 If you’re a Walt Disney fan, there’s probably nothing that will cheer you up faster when you’re feeling blue than curling up with a beloved Disney film.  With dozens of movies spanning decades, everyone understandably has their own Disney favorites!  Here are 10 of our favorite Disney films, each guaranteed to cheer you up on a bad day.

There’s something about Julie Andrews and Dick Van Dyke dancing with animated penguins that just brings a smile to your face.  Mary Poppins, released in 1964, is every bit as beloved today as it was 50 years ago; it inspired a recent Disney film exploring the making of Mary Poppins, and a soon to be released musical sequel!  This charming film is a must-see on a bad day.

Two words: Flash Slothmore.  His DMV scene is one of the funniest we’ve ever seen in a Disney film, and his character was our favorite part about Zootopia.  But don’t take our word for it.  The next time you’re having a bad day, give this adorable film a try!

8. Beauty and the Beast

We love everything about this 1991 Disney favorite, from its singing and dancing household objects to the stunning musical score to its independent, book-loving heroine.  This tale as old as time will sweep you away, and make you forget your troubles.

What’s not to love about a group of loveable monsters who meet the cutest animated toddler we’ve ever seen and discover that laughter is more powerful than fear?  This feel-good movie just oozes fun, and with some monstrously stellar comedic talent (Billy Crystal, John Goodman, Steve Buscemi), it’s guaranteed to life your spirits.

One of the most imaginative Disney movies we’ve ever seen, Meet the Robinsons involves time travel, alternate realities, and a pet T-Rex.  It also has an inspiring message to “keep moving forward” that is important to remember on a bad day, and it ends with a quote from Walt Disney – what more could we ask for?

This Disney film, based on characters from Marvel Comics, became a world-wide hit – and we aren’t surprised!  We adore inflatable healthcare robot Baymax, and we dare you not to smile at his adventures and his bond with his companion Hiro.  Big Hero 6 is full of heart and humor, and is a perfect escape on a bad day.

There’s a ton of retro fun in this 1973 Disney film.  It’s the centuries-old tale of the hero who robbed from the rich to give to the poor, portrayed by talking, singing animated Disney animals – and it’s full to the brim with light-hearted nostalgia.  This movie is sure to distract you on a bad day!

With terrific performances from two of our favorite comedic actresses (Amy Poehler and Phyllis Smith), Inside Out is deliciously original and decidedly clever.  Its message that we need to embrace all of our emotions is just the reminder we need when we’re feeling more like Sadness than Joy.

We’re not sure what we like most about this popular Disney film: Robin Williams’ antics as the Genie; loveable sidekicks Abu, Rajah and Carpet; or the enduring message that being yourself is always best.  Aladdin’s magical journey never fails to cheer us up!

We never thought we’d care this much about an animated robot!  We love this film for its idealistic, utterly endearing title character, who always sees the best in humans.  No matter how horrible your day has been, WALL-E’s message of hope never fails to resonate and remind us that tomorrow can and will be a brighter day!