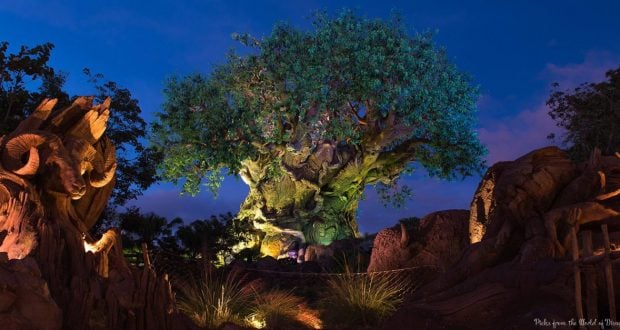 While we believe there is so much to see and do at Disney’s Animal Kingdom, some Guests visit the park under the misconception that there are only a couple of rides, limited dining options, and little to do compared to other Disney theme parks. The truth is, Animal Kingdom is the largest theme park at the Walt Disney World Resort, and experiencing it in its entirety may even take more than one day of your vacation. Keep reading to learn the truths behind 10 popular lies about Disney’s Animal Kingdom.

1. Animal Kingdom is a half day park.

This may have been the case in the years immediately following the park’s opening (though we still think it’s a stretch), but the Animal Kingdom you can visit today is certainly not a half day park. With over 500 acres featuring various rides, entertainment, animal walking trails, shops, bars and restaurants, and educational experiences with Cast Members, you can easily fill a whole day and then some in Disney’s Animal Kingdom.

Sometimes Guests visit Animal Kingdom only to find there aren’t many attractions, however there are plenty of things to see and do when you factor in all of the shows and animal walking trails in addition to rides. We understand the rush to rides like Avatar Flight of Passage, Expedition Everest and Kilimanjaro Safaris before the lines get long, but after doing those attractions plan to experience some of the park’s entertainment and explore animal walking trails. Maharajah Jungle Trek and Gorilla Falls Exploration Trails are not to be missed so you can spot tigers and gorillas, but there are additional animals to see in Discovery Island, Rafiki’s Planet Watch, and even DinoLand U.S.A. (with the American Crocodile between the Boneyard and Restaurantosaurus). Plus, Festival of the Lion King has returned!

EPCOT gets a lot of the attention as the best Disney park for foodies, but Animal Kingdom should be up there as well. The snack options in Animal Kingdom range from Dole Whips blended with rum to falafel and seasoned fries, plus unique drinks and desserts in Pandora: World of Avatar that look totally out of this world. The park’s signature restaurant, Tiffins, has become a fan favorite for fine dining in the park, and there are plenty of family friendly offerings like Flame Tree Barbecue and Restaurantosaurus.

4. Or for enjoying unique cocktails

Animal Kingdom also tends to fall behind EPCOT in terms of specialty cocktails, but the park can really hold its own here, too. The Dawa Bar in Africa has been a fan favorite for years as a spot to grab margaritas, and dining in Pandora can come with a signature green ale. In between, you can grab a sweet and boozy Himalayan Ghost or spiked lemonade outside Expedition Everest, and find Safari Amber, a beer brewed especially for Walt Disney World, throughout the park.

5. There isn’t enough for small kids.

There may not be a Fantasyland in Animal Kingdom, but there is plenty for kids and little ones to do around the park. From kid-friendly attractions like Triceratops Spin and the Fossil Fun Games in DinoLand U.S.A. to animal encounters at Conservation Station, the park offers lots to do for the whole family. Kid-friendly eats are also around every corner, with cheeseburger pods in Pandora, ice cream cones in DinoLand, and Joffrey’s donuts in and just outside of the park. For an immersive kid-friendly dining experience, don’t miss the Rainforest Cafe located right by the park’s entrance!

Actually, it is. Animal Kingdom is accredited by the AZA (American Association of Zoos and Aquariums) and as a result must adhere to the strict standards for animal care set in place to keep their accreditation. Additionally, the park offers educational opportunities for guests of all ages to learn about the animals that reside there AND the Disney Worldwide Conservation Fund is a leader in the conservation field helping numerous nonprofit organizations work to save animals and their environments all around the world.

7. It will be cooler because there is more shade.

Unfortunately, this is not the case. The plant life in Animal Kingdom actually gives off heat. While the added shade will certainly keep you out of the sun, don’t be surprised if you aren’t really feeling much cooler while exploring the park, and still remember to stay hydrated and take breaks to cool off throughout the day.

8. You only need to see it once

Animal Kingdom can easily be experienced multiple times within the same trip thanks to the animals! You may see different animals on different visits, as their decisions to be in Guest view in their habitats are based on so many factors (like the weather and time of day). Even taking a ride on Kilimanjaro Safaris before a rainstorm vs. after it will often give you a different experience. Plus, who wouldn’t want to take the extra ride on Expedition Everest or Flight of Passage?

9. It’s not the best park for shopping.

Incorrect. Animal Kingdom not only has some of the most uniquely themed Disney merchandise at Walt Disney World (think Mickey and Minnie plushes in their safari gear and shoulder Banshees in Pandora). On top of that, a lot of the products sold in Asia and Africa are made by artisans from those countries, so the park is a great place to shop for uniquely handcrafted jewelry, accessories and home decor items.

You can’t walk to Animal Kingdom like you may be able to with some other hotels near the Magic Kingdom, EPCOT, and Disney’s Hollywood Studios, but have you seen Animal Kingdom Lodge?! For the most immersive experience, a stay at the Lodge will have you surrounded by animals for much of your trip. Disney’s value resorts are also located closer to Animal Kingdom than the other parts, so if you’re hoping to save some money while also spending time in Animal Kingdom a stay at All Stars or Pop Century may be just what you need.