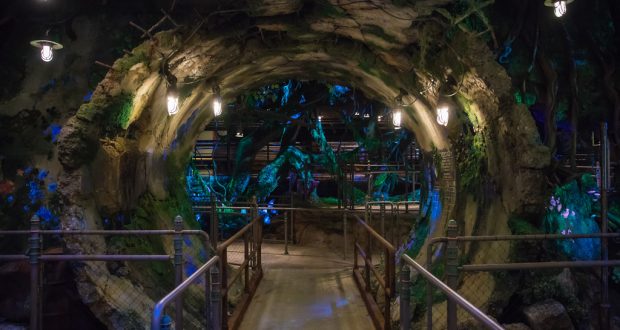 The Magic Kingdom is home to a trio of thrilling mountain attractions, the first of which is Big Thunder Mountain Railroad. The attraction is in the Frontierland section of the park and has guests board runaway mine trains for the wildest ride in the wilderness. Once onboard, guests whip through caverns, crumbling mines, and the town itself which is full of wildlife. With plenty of twists and turns, thrill seekers are sure to love Big Thunder Mountain Railroad.

Found right next door to Big Thunder Mountain Railroad is another Magic Kingdom mountain which might leave guests soaked. Splash Mountain brings guests on a journey with Br’er Rabbit who is searching for more adventure. Along the way, Br’er Rabbit is constantly attempting to evade capture by Br’er Fox and Br’er Bear, and the thrilling finale splashes guests down into the Briar Patch below.

The final Magic Kingdom mountain is found in Tomorrowland and brings guests into the intergalactic hub of Starport 75. Space Mountain invites guests to blast off into the thrilling darkness of space on an adventure that is out of this world. Guests love to enjoy a ride on Space Mountain time and time again as there are two different tracks for them to enjoy.

Avatar Flight of Passage is one of the two attractions located in the new Pandora – The World of Avatar area within Disney’s Animal Kingdom. Prepare to straddle what feels somewhat like one of those motorcycles at an arcade, be secured in, and then using 3D screen technology, awesome 4D effects, and motion simulation – feel like you are literally flying on the back of a mountain banshee in the most exhilarating way. Your banshee (somewhat like a flying dragon) will soar through the sky as it takes you on the ride of a lifetime through Pandora – The World of Avatar.

Also found in Epcot’s Future World is an attraction that brings guests to uncharted territory in deep space. Mission: SPACE invites guests into the International Space Training Center where they can train for the very first mission to space. Guests board simulators and can enjoy thrilling G forces while assuming the roles of Navigator, Pilot, Commander, and Engineer to ensure a safe flight. While all seems to be planned, there are some surprises along the way keeping guests thrilled the whole time! Orange Team (Mission to Mars) is more intense while the Green Team (Orbits Earth) is for those looking for a more steady ride into space.

Found right next door to Mission: SPACE is an attraction which brings guests into the world of automotive design. Test Track Presented by Chevrolet invites guests to design their very own SIM cars which they test on the track in Power, Responsiveness, Capability, and Efficiency. The track features a series of adventurous tests which culminate in a thrilling high speed loop along an outdoor portion of track.

Disney’s Hollywood Studios allows guests the opportunity to stroll through Hollywood and feel like stars. The Rock ‘n’ Roller Coaster brings guests into the musical side of Hollywood at G Force Records. There the band Aerosmith can be found recording their latest hit before inviting guests to a concert across town. Guests soon board super stretch limos and rocket through the neon lights of downtown to make it to the concert on time.

8. The Twilight Zone Tower of Terror

Found next door to the Rock ‘n’ Roller Coaster Starring Aerosmith is an attraction that offers guests the chance to star in their very own episode of a beloved television show. The Twilight Zone Tower of Terror brings guests into the abandoned Hollywood Tower Hotel where five guests mysteriously disappeared into The Twilight Zone years ago. Guests soon find themselves headed for the same fate while enjoying thrilling drops onboard an old service elevator.

Disney’s Animal Kingdom offers guests the chance to come face to face with a massive mythical beast. Expedition Everest begins as a serene tea train tour in the foothills of the Forbidden Mountain, but soon takes an ominous turn as guests find themselves faced with a piece of broken track. Guests suddenly plummet backwards into the mountain where they ultimately discover the fabled Yeti.

Take a ride on the “fastest hunk of junk in the galaxy”! Star Wars fan or not, riding in the cockpit of the Millennium Falcon is an experience not to be missed. This interactive attraction is located in Disney’s Hollywood Studios’ newest land, Star Wars: Galaxy’s Edge. With roles including pilot, gunner, and engineer – everyone must work together to reach their destination despite a few hiccups along the way.

Another thrilling attraction in Disney’s Animal Kingdom can be found in the Dinoland section of the park. Dinosaur invites guests into the Dino Institute where the technology to travel back in time has been perfected. Guests find themselves on an unauthorized trip uncomfortably close to a massive asteroid impact while trying to evade some pretty hungry dinosaurs. Dinosaur is a thrilling attraction that guests can’t miss!

Who’s up for a ride on the new Slinky Dog Dash at Hollywood Studios? Toy Story Land has crowds flocking to it for all the right reasons. This fun, new land makes guests feel as if they’ve shrunk down to the size of toy and are exploring Andy’s backyard with his beloved toys. Slinky Dog has joined in the fun with smooth dips and turns on his roller coaster! This is a great family-friendly coaster that is sure to be a favorite after just one ride. Have a blast with the breeze in your hair… just don’t forget to look around at all the awesome sights you’ll see across Andy’s toy-filled backyard. Finally, pull in for a stop to hear the sweet audio-animatronic Wheezy the Penguin singing for all the Slinky Dog Dash guests to enjoy.