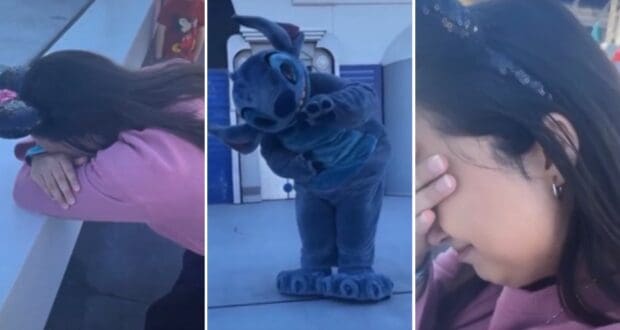 Who is your absolutely favorite Disney character? From Mickey Mouse to Princesses and Villains, our love for Disney characters is plentiful. But, one Disney adult found herself sobbing at the sight of seeing one special blue alien we all know and love as “Stitch“.

Stitch (AKA “Experiment 626“) is a sweet and mischievous character that first showed up in the classic Disney film, Lilo & Stitch in 2002. Since Stitch’s debut, he has grown into his own stardom as he is often on the top picks for most popular Disney characters.

If you’re an Disney-loving adult, you know that tears are well – just part of the Walt Disney World experience! From seeing Cinderella Castle to hugging Mickey, and waving at Disney Princess as they parade by – there are plenty of heart-warming moments no matter how old you are.

Disney Parks took to social media on “Stitch Day” (June 26 or “626”) to share a sweet video of a Disney-loving adult sobbing at the sight of seeing Stitch at Magic Kingdom Park.

In the video, it looks like Stitch is on stage in Tomorrowland at Magic Kingdom waving and greeting Guests. This young lady’s heart just couldn’t take the sight of the cute character and cries – a moment captured in the video below:

This isn’t the first heart-warming video to go viral! We’ve shared others such as the incredible sword in the stone moment at Magic Kingdom Park, an adorable baby enjoying the Festival of Fantasy Parade on Main Street, U.S.A., and even Mickey & Minnie’s sweet interaction caught on camera.

Whether you’re a Stitch fan celebrating 626 Day or just a Disney-loving adult that can’t help but let those tears flow in the Disney Parks, we’re right there with you. Keep the magic alive, Disney fans!