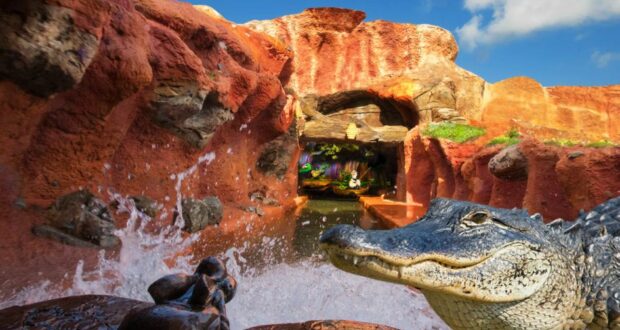 Yikes! It would be an eventful day at work if one had to fight off a large alligator. That is exactly what a Disney Cast Member had to do near the Splash Mountain attraction, as a video from several years ago resurfaces.

Ever since the tragic death of a 2-year-old boy named Lane Graves, who died from an alligator attack in 2016 while wading in the water one night outside of Disney’s Grand Floridian Resort & Spa, Disney has worked to step up prevention methods to keep gators away from its theme park despite its location in the heart of Central Florida.

Years after the child’s attack, Disney still remembers the tragic event with a bright lighthouse structure near the waters of Disney’s Grand Floridian Resort and Spa.

From fencing and signs around almost all bodies of water, along with regular patrolling of lagoons and ponds, Disney Cast Members understand the risk an alligator can pose. Plus, now, Guests visiting the Disney Parks from around the globe can’t help but notice the warning signs at Walt Disney World Resort.

While there were alligator preventions before the child’s death in 2016, Disney seemed to be much less concerned about the reptiles. One old video is resurfacing from what is believed to be 2009, showing a Disney Cast member fighting off a gator who seems rather interested in exploring Splash Mountain in Magic Kingdom Park.

Check out the video posted by @mainstreetmagic1971, below:

With the Disney Park retheme of Splash Mountain ride to “Tiana’s Bayou Adventure” coming in late 2024 to Walt Disney World Resort and Disneyland Resort, the comments note how this alligator was just preparing for the new The Princess and the Frog (2009) theme (even relating it to the Disney character from the film, Louis, the alligator) with, “He’s getting ready for when it turns into the bayou for tiannas ride” and “Man they made Louis look life like for the princess and the frog retheme.”

We’re thankful Disney has implemented numerous changes to ensure the safety of its Guests both in the Disney Parks and Resorts since this video was first taken.

Of course, our top Disney Tip here is always to be aware that Walt Disney World is in Florida, and alligators should still be expected in bodies of water. Stay smart, and if Disney posts warnings near the water, trust the signs.