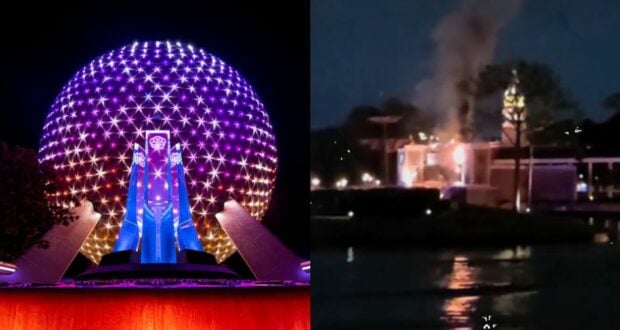 We are receiving reports of breaking news as we have learned of a fire breaking out at Walt Disney World Resort. The fire took place around EPCOT’s World Showcase, reportedly in the American Adventure Pavilion.

@disneytiktok took to social media on the evening of Tuesday, September 6, 2022, to share a video along with “BREAKING: A fire broke out this evening at World Showcase at EPCOT.”

The video is reported with the statement from @disneytiktok, “A fire broke out this evening at World Showcase in EPCOT. It looks like it’s the back of the American Garden’s Theater. This occurred towards the end of EPCOT’s Harmonious, the nighttime spectacular that performs daily. No word on any damage or injuries at this time but we’ll be keeping up with this in case there are any developments.”

Furthermore, in the video, you can see a boat rushing to the fire side of the World Showcase Lagoon, along with a Cast Member rushing to likely direct traffic away from the fire.

The American Gardens Theater is currently home to the Eat to the Beat Concert Series which takes place during the EPCOT International Food and Wine Festival. Thankfully, no performances are held during the fireworks spectacular, which hopefully means the theater was free from crowd traffic.

Since the fire started so close to the end of Harmonious, we suspect it started as a result of a stray ember from the massive fireworks that occur during the grand finale of the fireworks and projection show.

Currently, there are no further reports about the EPCOT fire. We will be sure to keep Disney Tips readers updated as we learn more about this breaking news.

2022-09-06
Jamie Sylvester
Previous: What a Disney Trip With Kids Is Actually Like
Next: Don’t Make These Mistakes On Your Next Walt Disney World Vacation