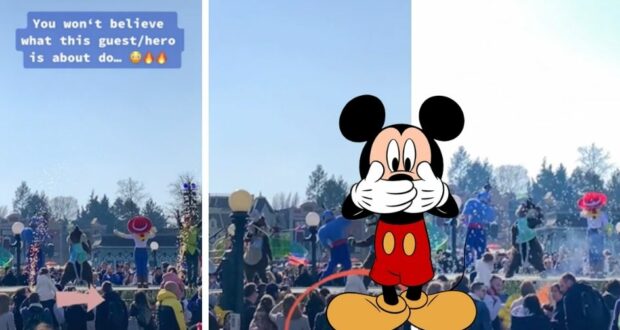 It’s a magical day at a Disney Park and you’re feeling warm with all of those pixie dust moments! But, how would you react if a sudden fire broke out in front of you? Well, this Disney Guest jumped into action.

Walt Disney World Resort may be in full 50th Anniverary celebration mode, but they aren’t the only ones! Disneyland Paris is celebrating its 30th Anniversary with special festivities and experiences.

With celebrations underway, parades and stage shows are in full swing as characters wave and wow the anniversary crowds flocking to Disneyland Paris Resort. But, when a fire broke out during one of the parades/stage shows, one Guest stepped up to help and is now being deemed a hero!

A viral video is spreading through Disney fandom from Disneyland Paris. The Dream & Shine Brighter entertainment is a stunning parade and stage show. As parade floats move through the Main Street hub in front of Sleeping Beauty Castle, there is also a stage filled with Disney characters dancing along.

In the video, you’ll see the crowd of Guests surrounding the stage as characters such as Genie, Chip ‘n Dale, Jessie, and Peter Pan entertain the crowd. There are small pyrotechnics that shoot off around the stage, with one causing a small fire that is seemingly innocent enough at first but is growing quickly.

The Guest seems to warn a Cast Member who likely leaves for help, but the Guest decided to put the fire out before it got any worse.

@inpixieitrust posted the video noting, “A fire broke out while we were watching the Dream & Shine Brighter Parade @disneylandparis last Saturday…. Luckily one Guest reacted very quickly!” then further notes in the comments, “It happened on Saturday, March 19, 2022, and luckily the fire did not expend!! Thanks to this Guest.”

Yikes! We would assume Disney would have fire extinguishers close at hand when any sort of pyrotechnics are involved. But, thankfully this Guest acted quickly before anything got too out of hand for the oblivious characters and surrounding fans.

Way to go to the gentleman that stepped in to save the day! Check out the full video of the Dream and Shine Brighter performance here: