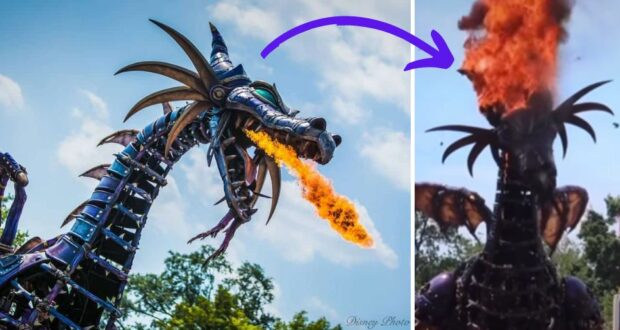 While Magic Kingdom attractions are part of the overall theme park experience at Walt Disney World Resort, Disney fan knows catching the entertainment is paramount for those magical Disney moments. We’re flashing back to a magical moment gone wrong, as video is resurfacing of the day when the Maleficient Dragon experienced a terrifying accident.

Magic Kingdom’s daily parade, known as the Disney Festival of Fantasy Parade, has been a Disney fan favorite for years. The parade’s show stopper, however, is the massive Maleficient dragon float. Themed after the popular villain from Disney’s classic animated film, Sleeping Beauty (1959), Maleficient is transformed into a dragon as she glides down the parade route and Main Street, U.S.A.

But, back on May 11, 2018, the daily Festival of Fantasy Parade had a terrifying accident occur. The float actually breathes real fire, which is controlled by an operator piloting the mechanical dragon, who can be seen through the rib cage of the beast. Prince Phillip walks in front of the dragon to fight off any wrongdoing.

Check out the resurfaced video below as shared by @truly.disney via TikTok:

The incident stunned Disney Park Guests as Cast Members quickly reacted, attempting to move bystanders as far away from the flaming float as soon as possible. Thankfully, no injuries were reported by surrounding Guests or Cast Members.

Here’s another video of that incident from a different angle with a Cast Member and a fire extinguisher working to put out the flame:

RELATED: Fire Reported at Disney World Outside of Cinderella Castle

Once the fire was extinguished, the parade float was ushered backstage, where it would remain for several months. It wasn’t until January 2019 that we saw the return of the iconic Maelificent fire breathing dragon.

Fast-forward to the present day, and Maleficient is still rolling through Magic Kingdom Park daily after a short break during COVID-19 closures. It’s incredible to see the video resurface four years later, but we’re thankful the Maleficient dragon is still the show-stopper of the parade!