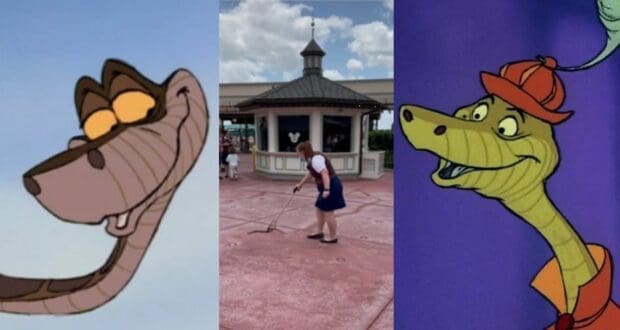 Yes, you read that right! Walt Disney World Resort IS the most magical place on earth after all… so much so that even a snake did its best to gain access to Magic Kingdom Park.

Reptile or human, it’s good to know that when planning a visit to Magic Kingdom, EPCOT, Disney’s Hollywood Studios, or Disney’s Animal Kingdom, a Park Pass Reservation is required to enter. The Park Pass system has caused much debate as Disney will turn away anyone without a Park Pass, even a recent elderly couple.

Of course, we suspect in this snake’s case, that checking for a Park Pass prior to entering Magic Kingdom wasn’t an option. I mean, where would a snake store a phone anyway… and yes, thumbs would be important too.

The viral video posted by @disney_with_bren is cute in a funny way as it plays into the angst against the new Park Pass Reservation system as one Park Guest spots a snake in front of Magic Kingdom’s entrance. The video is noted with “He didn’t make a res”, poking fun at the new system.

You’ll see in the brief video that Cast Members work to move the snake along, away from the Guests and the Park entrance. Check out the TikTok video below:

Poor guy! But kudos to the Cast Member willing to step up and help as many would be terrified to be that close to the slithering friend. The comments on the video also joke at the way one of the Cast Members seems to be attempting to direct the snake towards the exit with hand motions as one would do for a Guest.

It wasn’t too long ago another video went viral of a family who was spotted trying to slip past the Disneyland Park entrance without scanning tickets. The Guests didn’t get too far before Disney security stopped them.

In the snake’s case, he’d have better luck making his way into Disney’s Animal Kingdom!