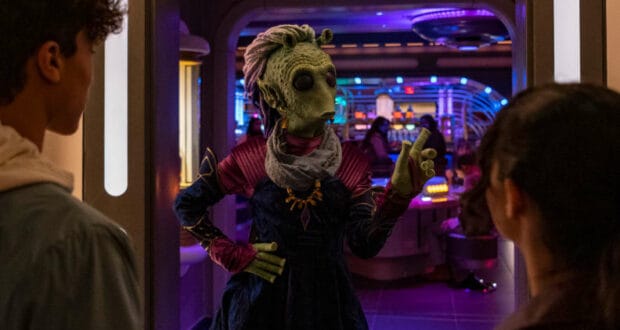 Who You Will Meet Onboard Star Wars: Galactic Starcruiser

There will be so much information going out today about Star Wars: Galactic Starcruiser. This journey is so much more than just a hotel. It is a fully immersive experience that will take you into the Star Wars Galaxy, and you need to show where your loyalties lie.

Related: What if You Have Allergies on Star Wars: Galactic Starcruiser?

Characters are going to be a massive part of this adventure. There will be some that you recognize and some that are new. You will have heroes from the resistance and others from the first order. There will be others who are just Crew Members, and they will be trying to see who you were with.

They will be interacting with Guests and this will be a huge part of what makes Star Wars: Galactic Starcruiser so unique. You’ll be making new friends, learning helpful information, discovering secrets on the ship, and going on special missions. This is just a small taste of what will happen while onboard.

This is something so different than Disney has ever done before, and a huge part of it is because of the amazing Cast.

Before you embark on your journey on Star Wars: Galactic Starcruiser, you should get familiar with some of the characters you will meet. A huge thank you to clickorlando.com for the information and photos.

She will be leading the crew through the galaxy and can be found giving instructions on the ship’s bridge.

The cruise director of the Halycon starcruiser who will act as the captain’s right hand. Also, in charge of onboard entertainment.

An enthusiastic mechanic that is well-known for his fast-wit and personality of a golden retriever puppy.

On the lookout for any resistance fighters that are rumored to be on the ship. Reports directly to the Supreme Leader.

Right hand droid and a valuable part of the crew. Keep this droid away from the First Order.

The Beyonce of the galaxy. This celebrity Twi’lek singer performs her hits to her biggest fans. Catch some of her music on DJ R-3X’s album. Is singing her only mission on board the Halcyon?

Gaya’s premier manager on board the ship.

Gaya’s Rodian friend and instrumental performer during the voyage.

Can be seen illuminating the main atrium. Also serving as your virtual assistant while in your cabin.