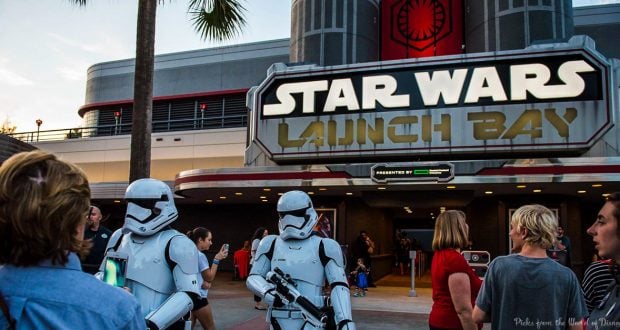 This is currently the most popular attraction in Disney’s Hollywood Studios and should definitely be visited with a FastPass in order to save lots of time waiting on line. Shrinking guests down to the size of toys, Toy Story Mania whisks guests through a series of interactive 3D midway games hosted by their favorite Toy Story characters. Families will love visiting time and time again to try and beat each other’s high scores!

The Muppets have taken over the Streets of America section of the park with their massive theater housing a zany and hilarious show. The preshow area is bursting with sight gags, funny props, and corny jokes all leading up to the 3D show. The main attraction features the Muppets at their best with a few surprises along the way. The whole family will love laughing along with Kermit and pals and should definitely not miss this attraction.

Here’s your chance to meet Sorcerer Mickey! Mickey sports his classic Fantasia outfit while Minnie is dazzling in her red carpet best. We love this spot for great photos, autographs, and typically short wait times!

The Adventure Continues – For fans of the fictional Star Wars universe, this is as close to entering it as possible. After passing by memorable scenes and characters from the films on the line, guests board a star speeder for what should be a routine flight. After finding out that there is a Rebel Spy on board, things get interesting and guests travel through a series of randomized 3D scenes, ensuring that each experience is unique!

Fans of the classic television show The Twilight Zone and fans of thrills in general will love this eerie attraction which dominates the skyline of Sunset Boulevard. Guests enter the Hollywood Tower Hotel and discover that something sinister happened years ago that forced the hotel to be abandoned. After boarding a service elevator, guests find themselves traveling directly to the Twilight Zone! Families will love this attraction since the elevators are controlled by a computer system which randomizes the drop sequence making each ride unique.

Located right next door to The Twilight Zone Tower of Terror, this rocking adventure takes guests through fictional G Force Records where Aerosmith is recording their latest hit. After being invited to a concert across town, guests soon find themselves rocketing through Los Angeles to make it to the concert on time. Families will love the thrill of the initial launch and the rocking Aerosmith tunes on this attraction!

This unique full service restaurant is located in the Commissary Lane section of the park and features dozens of classic cars set up as tables in a drive in setting. Playing on the big screen are classic sci-fi movie clips, cartoons, and skits that every guest will enjoy. With entrees including a smoked turkey sandwich, vegetarian shepherd’s pie, and grilled salmon, there is something on the menu for every family member to enjoy.

Get ready to watch a battle of good vs. evil as Mickey and Friends take on some of the creepiest of Disney Villains! This outdoor, amphitheater nighttime show is bursting with awesome music, pyrotechnics, lasers, fireworks, and water screens. Plus, the amount of Disney characters you’ll catch a glimpse of is rather impressive! Check show times and think about making a Fantasmic dining package or FastPass+ for prime seating.