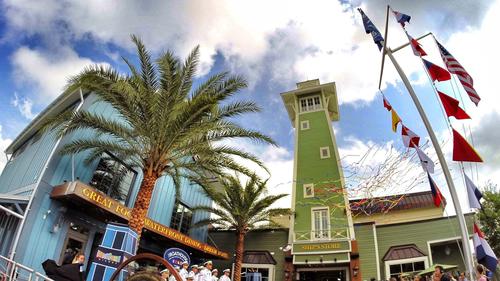 While Sanaa is my personal favorite table service restaurant at Animal Kingdom Lodge, I do believe that Boma is the best restaurant to introduce guests to African cuisine. The buffet setup of Boma gives guests plenty of options to be as adventurous as they please in trying new things or stick to the basics if that’s what they prefer. The number of options at Boma outweighs those found at other Disney buffets, and zebra domes alone are enough to make a meal here one of the most memorable of your trip.

There are so many things to love about The Boathouse at Disney Springs, from the Amphicar tour experiences to the Dockside Bar and everything in between. The Boathouse is my go-to recommendation for fresh seafood at the Walt Disney World Resort, but the best thing about this restaurant is that the menu really does have something for everyone. You can dine at The Boathouse and find steaks, seafoods, and even some of the best desserts in Disney Springs, all to fit a variety of budgets. You can totally splurge and order a lobster bake for two, or you can stop in for lunch and get burgers or salads– the menu really covers anything you might be in the mood for all with picturesque waterfront dining.

If you are looking for the ultimate signature dining experience at the Walt Disney World Resort, I recommend the Yachtsman Steakhouse at Disney’s Yacht Club Resort. This is as classic as steakhouses come, with high quality cuts of meat and the kind of ambiance you’ve come to expect from Disney signature dining. The Yachtsman is also one of my favorite signature restaurants in terms of value– it’s expensive as is any Disney signature restaurant, but it offers such a top-notch experience without splurging to the extent of say Victoria and Albert’s.

Like The Boathouse, I love California Grill for its variety. In the mood for sushi? They have that. Filet mignon? They have that too, along with brunch, vegetarian specialties, and more. Of course, with California Grill’s prime location atop the 15th floor of Disney’s Contemporary Resort, it’s quite popular during the fireworks as the restaurant and the adjacent deck offer spectacular views. I recommend trying brunch too however as a late breakfast here can also be the perfect way to start a trip to the Magic Kingdom.

It is difficult to compare the food at the Sci-Fi Dine In Theater at Disney’s Hollywood Studios to some of the standouts on this list but it’s really the ambiance that makes this one so special. While dining at this restaurant guests are invited to sit in vintage cars alongside retro sci-fi films, with a menu feature modern takes on classic American drive-in food. Is the food the best of all the Disney restaurants? Not necessarily, but if you’re looking for a reasonably priced burger with one of the most unique table service experiences around this one is for you.

Coming up with the worst restaurants for this list was much more difficult. I’ve never really had a bad meal or general dining experience at the Walt Disney World Resort, so I’ve attempted to rationalize which restaurants I feel are the worst based on things like how likely I am to dine there while vacationing in Disney, how unique the menu is, and if it was worth the price.

Tony’s Town Square Restaurant located in the Magic Kingdom isn’t the worst Italian food I’ve had, but it isn’t the best either. For the kind of food served at Tony’s I would rather dine at Trattoria al Forno or Via Napoli while visiting the Walt Disney World Resort, as Tony’s is more comparable to an Olive Garden than authentic Italian cuisine. Still, the atmosphere of Tony’s is fun, and if you get a table outside you can have a decent view of the parade. And if you have picky eaters with you this can be a fair compromise as it’s a diversion from the safety of burgers and hot dogs but it isn’t unique enough to scare off anyone in your group.

I actually really enjoy Nine Dragons on its own, but compared to all of the other restaurants at the Walt Disney World Resort it would be far from my first pick. The pros of Nine Dragons are that there are a few entrees (like the rice bowl) that are on the more affordable side and come with lots of food, and you almost never need a reservation so it’s a convenient last-minute place to dine in Epcot. The downside though, which is why it’s at the bottom of this list, is simply because the food isn’t all that unique. I assume the restaurant plays it safe being in an American theme park, but this safety means that I can find similar menu items at restaurants at home, so I’m less motivated to dine here while visiting Epcot.

Similar to Nine Dragons, Rainforest Cafe makes the list because I can find this restaurant in other locations around the country– so when in Disney I’d rather try something more unique. Thankfully, there are a couple of alternatives to Rainforest Cafe though if you are looking for a sort of similar yet different experience. For a similar atmosphere, T-Rex in Disney Springs is a nice change from the more common Rainforest Cafe, and if you are just looking to use your Landry’s rewards card, Yak & Yeti in Animal Kingdom offers more unique cuisine.

The ESPN Club at Disney’s Boardwalk is actually a very nice sports bar, and can be a great place to get dinner and catch a game… but is that really what you want to be doing when you’ve spent thousands of dollars on a Disney vacation? The food is good and there are 40+ screens, but just because there are so many other options at Disney I would suggest going for something more memorable (unless you happen to be visiting during the Super Bowl or have an off-day from the parks).

Planet Hollywood is not necessarily bad, it just isn’t on the list of places I would take the time to dine at while on vacation. The food is more comparable to your standard chain restaurant, which may be a safe bet for picky eaters but isn’t something I would be looking to spend vacation budget on while visiting the Walt Disney World Resort.That being said, the monster shakes look interesting, and while I find it difficult to justify spending time here while on vacation I would give those a try if I were local!