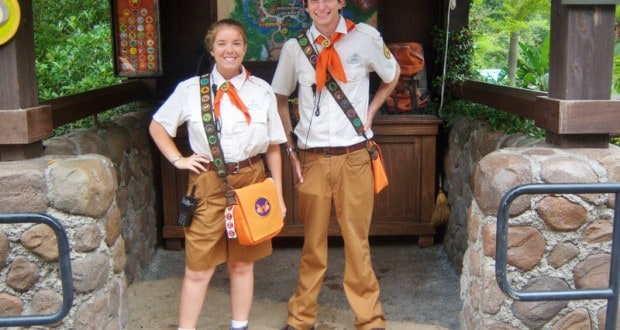 Disney’s Animal Kingdom Park is definitely the place where the slower you go, the more enjoyable your experience is. Take your time and enjoy the lush living environments; this is the trick to discovering the secrets this park has to offer. Look up the birds and canopy of trees, and look down at the carefully created leaf prints, animal tracks, mud cracks, and even bicycle tire prints along the pathways. Meander from side to side and seek out the animals that make their home here. Find the special touches and intricate details Disney has included both outside and inside the buildings. While you’re observing, check out a few of the details that aren’t as well known about Disney’s Animal Kingdom.

Sometimes the best part of a day at Walt Disney World is exploring the path less traveled. At Disney’s Animal Kingdom, there happens to be several lesser known paths that twist around the Oasis area. The Oasis begins soon after you go through the turnstiles, and is best experienced by slowing down, being patient, and enjoying the beauty around you. Cast members are often standing in this area holding small animals in cases for guests to investigate. Go a little further into the Oasis and pick a path to wander down. The paths intersect and often times meander in other directions. Small waterfalls dot the area and animal viewing areas can be discovered populated with colorful birds, small mammals, and exotic reptiles. Many times there are cast members feeding the animals on these paths, and they are always willing to take some time and share their knowledge or answer questions. The bottom of the Tree of Life branches out into the Oasis, and this is a good chance to get a close-up look at the animals carved into it. I feel the paths of the Oasis are one of the most beautiful areas in Disney’s Animal Kingdom.

The huge 145-foot tall Tree of Life isn’t a secret and is visible almost immediately upon entering the park, but the creation of this structure isn’t as well known. While it resembles a massive tree, it isn’t made of leaves, bark, and roots, but rather an oil rig. Designed to withstand hurricane winds, the branches are actually steel pipes and the leaves are artificial and attached by hand. A plaster cast allowed sculptors to create the wonderful animals in the bark and roots. The tree holds another secret; inside the base of the tree is the theater for the It’s Tough To Be a Bug” 3-D attraction.

The lions are one of the most popular animals on Kilimanjaro Safaris, and most people know to look for them on the high rock formations near the end of the Safari. What isn’t apparent, however, is how Disney encourages the lions to be visible in this location and not hiding in the shade away from the cameras. Air conditioning is installed in the large rocks to keep them comfortable in the warmer months, and the rocks are heated in cooler temperatures. There is also a large unseen pit to keep the lions in their area and not hunting the other inhabitants of the savannah.

Many of the eateries and shops in Disney’s Animal Kingdom are secretly teaching guests a lesson about animal similarities and how they all interconnect in the food chain. For example, the Flame Tree Barbeque restaurant showcases the predator-prey connection. The tables are decorated with prey animals, and the chairs are detailed with predators. Other structures in the dining area reflect this theme as well, like the light posts. The Disney Outfitters shop features herd animals, while Island Mercantile displays animals that migrate.

Once guests cross the bridge onto Discovery Island, look for the Wilderness Explorers booth. The name is taken from the Disney movie “Up”. In this movie, Russell was a Wilderness Explorer. This location is the starting point for a special kind of scavenger hunt throughout Disney’s Animal Kingdom. It’s easy to rush right past this, but it’s definitely worth stopping for. Participating guests are given a field guide booklet with clues to find at stations all over the park, many of which are tucked away in hidden spots that you might not have noticed before. Guests are also taught the Wilderness Explorers secret call. Once you perform the activity or answer the questions at each station, you earn a sticker badge. The game can be performed at your own pace and over more than one day, if necessary. While the activities are fun and easy, you may find yourself learning new things about the cultures represented in the Animal Kingdom, about important conservation tips, and about the animals as well. Earning all the badges gives you the title of Senior Wilderness Explorer and a neat keepsake to take home at the end of your trip.