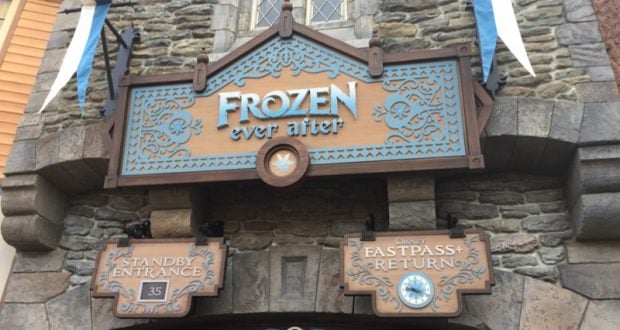 Totally Cool Things About Frozen Ever After At Walt Disney World

It is easy to see why Frozen has remained such a popular movie for guests of all ages.  It is no surprise that Disney would make an attraction based on the film and they did a spectacular job with that, too!  Here are a few totally cool things about Frozen Ever After that you must check out:

7. It used to be Maelstrom.

Frozen Ever After first opened in 2016.  Prior to that it was Maelstrom, an attraction that took you throughout Norway.  The ride track is exactly the same, but the scenery and details have been completely changed to fit with the new Frozen theming for the attraction.  The announcement that Maelstrom would close to create a Frozen attraction caused a lot of uproar for Disney fans, but the new attraction remains extremely popular.

6. All of the characters are there.

You get to see all of the favorite characters from Frozen and Frozen Fever.  There will all be there, including Elsa, Anna, Kristoff, Sven and Olaf.  You will even see some others there, too.  You don’t have to worry about missing out on your favorite!

5. The original cast performed the music.

Each and every one of the original cast recorded the music for the attraction, too.  Disney had the real voices, including Idina Menzel, Kristen Bell, Josh Gad and Jonathan Groff, come back to complete all of the sound for the attraction.

4. The animatronics are some of the latest technology.

3. You get to enjoy winter in the middle of summer.

The attraction is set in the summer time in Arendelle.  Elsa has used her icy powers to bring the ice and snow to the summer for a summer snow day. This special summer snow day is in honor of the day that Princess Anna saved her sister, Queen Elsa.

2. There are tons of details in the ride queue.

You will want to read all of the signs and check out every little detail throughout the ride queue.  Oaken’s Trading Post is there, too!  All of the little details and signs help to tell the history of the characters and story for Frozen.  If you know the movie, you will definitely pick up on all of the little extras that Disney worked in.  Plus, looking around at all of these things will help to pass the time as you wait in line!

1. There is an attraction photo to commemorate the experience.

We love all of the ride photos, so we are extremely glad that Frozen Ever After has one.   The photo for this attraction is taken on the small hill that you go down after seeing Marshmallow and the little snow babies.  The photo will be taken automatically and then added to your My Disney Experience account for you to view later.  Disney technology adds the photo to your account via your Magic Band.