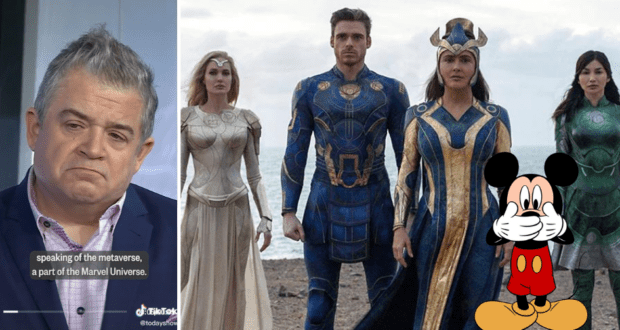 Credit: The Today Show & Disney Plus

Disney is known for keeping a tight lid on upcoming projects, with actors often appearing nervous about giving away too many details. In fact, several actors have admitted to signing contracts that prevent them from talking about certain aspects of a movie they worked on.

Disney does this, in part, to ensure surprise elements for fans of their various films and tv shows. Most people do not want to be privy to any spoilers before watching new Disney entertainment. The Mandalorian (2019) director Jon Favreau worked incredibly hard to prevent leaks about Luke Skywalker’s appearance at the end of Season 2. Unfortunately, things did not go so smoothly for an actor in an upcoming Disney movie that has yet to be officially announced.

Patton Oswalt had a post-credits cameo with Harry Styles at the end of the Eternals (2021) film. He voices a computer-generated character named Pip the Troll, while Harry Styles portrays himself as Starfox. Oswalt appeared on the Today Show yesterday, with Al Roker egging him on for information about his role in the Marvel Cinematic Universe. Oswalt casually stated, “They have announced there’s going to be an Eternals sequel. Chloé Zhao is going to direct it.”

The problem is…this film was never officially announced! With Disney usually incredibly thorough in their efforts to hide details like this, the question is, how did this happen?

Pip the Troll, aka Patton Oswalt was here to talk about #TheEternals and filming with HarryStyles. #todayshow #3rdhourtoday

Patton Oswalt didn’t seem even slightly cautious in his conversation, appearing as if he had no idea he wasn’t supposed to address it. Fans of Disney who know the company’s policy all too well took to the comment section and had a field day with the leak!

Patton Oswalt seems like such a sweet and kind-hearted fellow. We hope he doesn’t get into any trouble for this accidental slip!