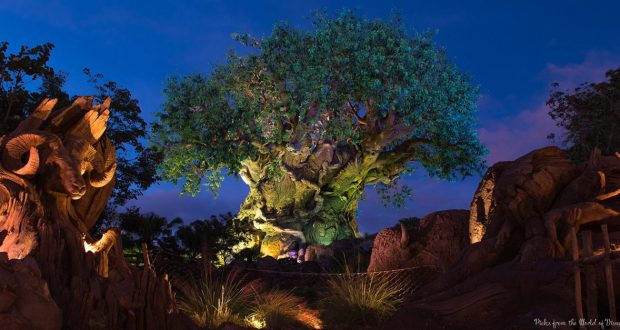 Walt Disney World’s Animal Kingdom is by far Disney’s biggest theme park. It features live animals and a theme that centres on conservation and the natural environment. Beautifully designed with global artifacts and architecture, Animal Kingdom is the perfect place to meet animals from around the world, and to experience some of Disney’s most riveting attractions – not to mention the wonderful world of Pandora!

Like other Disney parks, Animal Kingdom is divided into several different sections, or lands, with distinct, but related, themes.

All About FastPasses+ and Tiers

Some rides are more popular than others, so Disney has a tier system in place to make sure that all guests have a chance to experience these rides.  All rides at Animal Kingdom are considered either “Tier 1” or “Tier 2”, and you can only choose one FastPass+ in the Tier 1 group per day – the rest of your FastPasses+ will be from the Tier 2 group.

Both of Pandora’s rides (Avatar Flight of Passage, and Na’vi River Journey) are Tier 1 attractions, meaning you’ll only be able to pick a FastPass+ for one per day.  If you manage to get one, we’d recommended a FastPass+ for Flight of Passage, as wait times can reach several hours for this ride.  Then, arrive first thing in the morning (and/or take advantage of Extra Magic Hours, if you’re staying on property) to line up for whichever Pandora ride you don’t have a FastPass+ for – this is when lines will be at their lowest (but you’ll still have a wait ahead of you!).  Tier 2 rides at Animal Kingdom are DINOSAUR, Expedition Everest – Legend of the Forbidden Mountain, Festival of the Lion King, Finding Nemo – The Musical, It’s Tough to be a Bug!, Kali River Rapids, Kilimanjaro Safaris, Meet Favorite Disney Pals at Adventurers Outpost, Primeval Whirl, Rivers of Light, and UP! The Great Bird Adventure Show.  Your best options for Tier 2 FastPasses+ are Expedition Everest (unless you want to use the single rider line) and Kilimanjaro Safaris, as lines for both of these attractions can get quite long.

There are a ton of fun and diverse food options at Animal Kingdom.  Restaurantosaurus in DinoLand USA has familiar quick service food in a delightful paleontology setting, while Satu’li Canteen in Pandora offers the most creative food we’ve seen on property, designed to look like it grew on an alien planet. Enjoy global cuisine in a beautiful riverfront setting at the Nomad Lounge and Cocktail Bar, or eat your fill – and meet classic Disney characters in safari garb! – at Tusker House.  We also love the gorgeous South Asian decor and eclectic food at Yak ‘n Yeti.  And if you’re looking for a quick on-the-go snack, our favorite is the irresistible cinnamon glazed nuts; you’ll find them at carts around the park, and we’re pretty sure you’ll be back for more!

Now that Animal Kingdom has extended its hours and is open at night, there’s more to see than ever before!  While Pandora’s bioluminescent wonders are the star of the show, there’s so much more to see and do.  Check out an evening safari Kilimanjaro Safaris to view nocturnal animals like never before.  Be enchanted by the stunning floating sets, video projections and laser light show of Rivers of Light, and don’t forget to walk by the Tree of Life, where animals come alive every ten minutes in a magical show of color and light.

Fun fact: Disney’s Animal Kingdom originally was designed to involve mythological creatures as well as existing and extinct animals, but this section of the park (to be called “Beastly Kingdom”) was never built.  You can see remnants of the initial plan to include these legendary, fantastical creatures in Animal Kingdom’s parking lot signs and even in its logo.  And now you know!