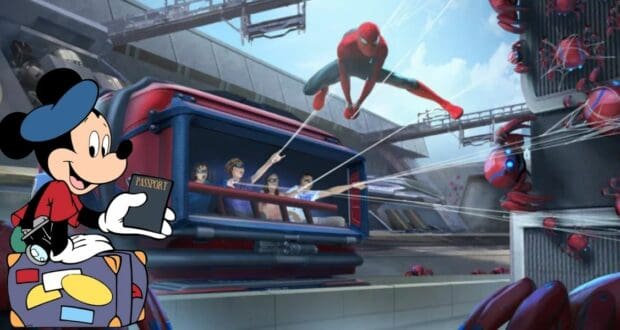 We’ve been waiting for this for some time now. We knew it was coming when Disney Parks launched a brand new Avengers Campus commercial a few weeks ago, letting us know that Avengers Campus at Disneyland Paris would be coming in early summer 2022. Now we officially have a date.

In a tweet today, Disneyland Paris announced that the Marvel Avengers Campus would launch on July 20, 2022. While this isn’t exactly “early summer” in our opinion (more like mid-summer) at least we do now have a confirmed date.

“Calling all heroes! Prepare to assemble from July 20,2022 for Marvel Avengers Campus, an epic new land opening at Disneyland Paris.”

But that’s not all. Shortly after this announcement, a second announcement was released, spilling the details on two brand new attractions we can expect to see at Marvel Avengers Campus when it launches this summer, and our jaw has officially hit the floor.

The first attraction announced seems to be a rollercoaster-style ride where you will be briefed by none other than Tony Stark himself. Disney Parks explained: “There’s no time to waste as recruits join not only Iron Man, but Captain Marvel herself on a mission through space in a vehicle Stark has equipped with a homing device, to lure this threat away from Earth.”

The second ride, will be a Spider-Man-themed attraction where Guests will be able to practice their web-slinging, in a brand new technologically advanced attraction that recognizes body movements and gestures so you can shoot your own web from your wrists. HOW COOL.

“Have you ever wanted to sling webs? Well, on SPIDER-MAN W.E.B. ADVENTURE recruits of all ages are invited to do just that! It’s time to team up with Spidey and help capture the out-of-control Spider-Bots, Peter Parker’s robot sidekicks, before they wreak havoc on the Campus.

Through specially designed, innovative technology that recognizes body movements and gestures, all you have to do is reach out your hands and start slinging webs from your wrists, just like Spider-Man! And you’ll need these newfound powers as the Spider-Bots multiply, becoming harder and harder to beat. After helping Spider-Man complete the mission, recruits will be able to see how many Spider-Bots they caught as a team in their vehicles.”

Needless to say, we are booking our tickets to Paris now.