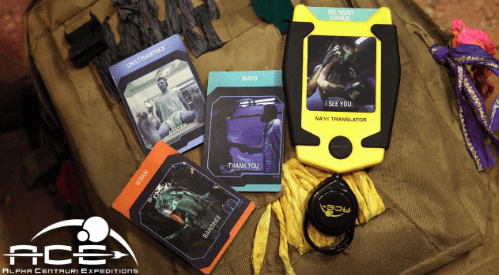 Disney Parks Blog has release more information on the Na’vi Translator device that is expected to provide a deeper immersion for guests into the new land, Pandora – The World of Avatar.  This new device that allows guests to interact in a unique way within this mystic land will we sold at Windtraders on Pandora starting this summer during opening.  Cody Hampton, merchandise product developer for Disney, had this to say about the device:

“This device was originally developed by Alpha Centauri Expeditions founder Marshall Lamm,” explained Cody. “The Na’vi have no written language, so the translator will be a helpful tool for any human visiting Pandora. Guests using the translator can learn how to pronounce 90 Na’vi words using interchangeable translation cards. The device also lights up at night, which makes it perfect for nighttime explorations on Pandora.”

The Na’vi Translator will be sold in a set that comes with 15 translation cards.  The device will be able to attach to a belt or backpack so that you can easily carry it with you through the land.  There will be additional translation cards sold in trading packs that include 8 randomly selected cards.  There will be Nouns (Blue), Adjectives (Prurple), Animals (Orange), Landscapes (Tan), Phrases (Aqua), Plants (Green) and Gear (Yellow).  Careful consideration has been put into the words selected to translate for the language to focus on words that guests would use most often if they were visiting somewhere new.  The words were based on audio recordings from Lightstorm Entertainment and Dr. Paul Frommer, creator of the Na’vi language for Avatar.  The words were carefully selected and recorded to ensure that it perfectly matched the Na’vi language. 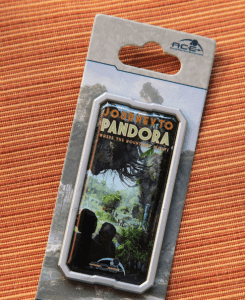 Pandora – The World of Avatar is set to officially open to guests on May 27th.  There are cast previews for the land starting as well as Annual Passholder previews in the week prior to opening.  Disney is already making changes to bus stops and traffic flow at Disney’s Animal Kingdom to help accommodate the increase of traffic to the area as the much anticipated opening of Pandora gets here.

How cool is it that guests can learn the language of the land while they are there?