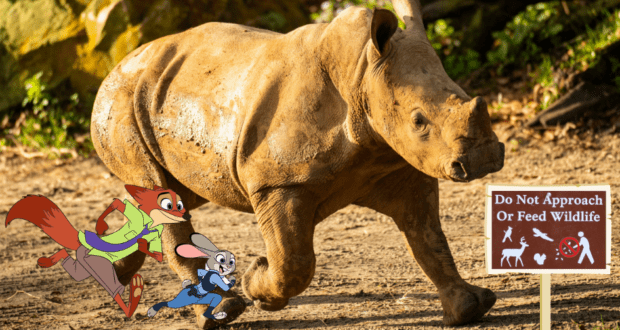 Feathered Friends in Flight is located in the Asia section of Disney’s beautiful animal sanctuary. The presentation is roughly a half hour long and gives Guests a behind-the-scenes look at free-flying birds in the Park. Another show featuring the beloved bird species is Animal Encounters: Winged Encounters – The Kingdom Takes Flight. Wow, that’s a mouthful! Located on Discovery Island, the show features brightly colored birds, like the one you’re about to see in this video.

Posted by @kelliefromthekingdom, the scene depicts a Guest following closely after a gorgeous parrot roaming Animal Kingdom’s grounds. In all fairness, the Disney visitor did not seem to mean any harm, but a Cast Member nearby was not amused by her actions.

As she follows the creature closely around a corner, she says hi to it, gaining ground on the poor fellow. A Disney animal handler asks her to give it space as she suddenly realizes her actions are not met with his approval.

The bird flies into the Cast Member’s arms as the lady exclaims, “Oh, they’re part of this whole show.” To be honest, I feel bad for her. She’s probably just an animal lover who didn’t mean any harm, but the video’s commenters were not quite so forgiving. TikTok user @jazsx33 wrote, “I’ve seen grown adults try to pick up squirrels, and it’s like hi friends pls don’t TOUCH THE WILD ANIMAL.” Another user, @mrgso42, interjected, “I don’t think that CM was mad so much as scared and stressed. those birds are delicate, expensive, endangered, and can be dangerous.”

Disney’s Animal Kingdom has an Affection Section designated for Guests who want to interact with domesticated animals. All other creatures located inside the Park should not be trifled with. I think it’s safe to say that this unknowing Disney visitor learned her lesson!

2022-08-30
Christy Weinberg
Previous: The Secret Entrance Into Disney’s Animal Kingdom
Next: Some of Disney’s Most Beloved Cast Members Have Finally Returned!