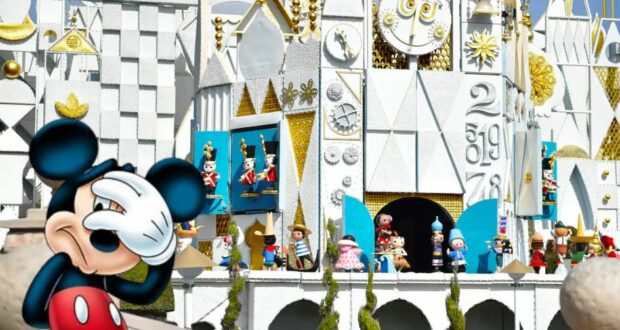 Another day. Another Disney Guest not thinking clearly! It seems like more incidents of Guests behaving badly at Walt Disney World Resort and Disneyland Resort are surfacing. The latest involves the iconic “it’s a small world” attraction.

Unfortunately, the classic “it’s a small world” boat ride at both Magic Kingdom Park and Disneyland Park seems to be the hot spot for Guests making bad decisions. We previously shared multiple alarming incidents that have occurred with Guests mistreating the Disney attraction.

Now, a new video has surfaced from the Disneyland Resort’s version of “it’s a small world.” This time, a man thought it would be a good idea to slow the boat down to likely prolong the ride experience by grabbing onto the track that the boat glides through.

@celvil711 took to social media to share a video noting, “What happened to keep your arms inside the boat? #fyp #disneyland #itsasmallworld #wtf.” She further adds text to the video saying, “He was slowing down his boat and there ended up being 5 boats behind us.”

Check out the TikTok video below:

Yes, this is exactly why Disney repeatedly announces that keeping all parts of the body in the ride vehicle is critical. Not only is it extremely dangerous, but it also ruins much of the experience for surrounding Guests.

The comments on the video are both entertaining and upsetting. One comment notes, “Who wants to spend more time in its a small world, that ride is like a layer of hell” with another saying, “The ride already feel so long why make it slower.”

With a situation like this, we would expect a Cast Member watching via camera to announce overhead to keep arms in the boat. But one comment to the video says, “The cast members used to keep an eye on cameras and call out people like that over the loud speaker, but I havent seen them do that lately.”

As with any Disney experience, the next time you visit a Disney Park, our top Disney Tip is to PLEASE (please!) follow the theme park safety guidelines as they are in place for a reason.