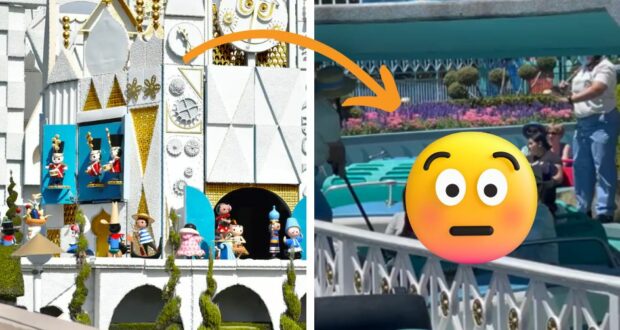 “it’s a small world” Boat Gets Stuck; Cast Members Work to Free It

It’s a magical day at the Disney Parks… but even the most magical days have moments of surprise. Video captures Guests visiting Disneyland Park found themselves stuck on an “it’s a small world” boat as Cast Members worked to free.

@DisMomKnows took to social media on August 8, 2022, to share a video of an “it’s a small world” boat seemingly wedged between the attraction walls. The video is noted with “Never seen this happen before #disneyland #itsasmallworld.” Check out the video below:

As you can see in the video, several Cast Members work to fix the problem as Guests on the stuck Small World water ride remain seated. It takes a while, but the video cuts off shortly after the Cast Members free the boat.

While we’ve seen experiences such as “it’s a small world” being transformed into an Encanto (2021) inspired projection show and Cast Members putting on a rubber duck race with the attraction, we have never seen a boat get stuck, needing Cast Members to free it.

We’re thankful the Cast Members could free the popular attraction so it could continue without having to evacuate theme park Guests on “The Happiest Cruise That Ever Sailed.” Disney describes the nostalgic attraction with:

Voyage along the Seven Seaways canal and behold a cast of almost 300 Audio-Animatronics dolls representing children from every corner of the globe as they sing the classic anthem to world peace—in their native languages.

Amid vibrant backdrops, you’ll travel through country after country, and by journey’s end, you’ll see that it really is a small world after all.

2022-08-08
Jamie Sylvester
Previous: Why Walt Disney World Is Still The Most Magical Place on Earth
Next: Walt’s Iconic Plane Gets Disassembled for Its Next Adventure