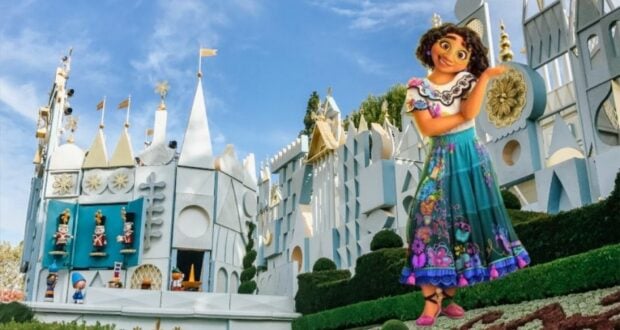 Iconic “it’s a small world” Attraction Gets an ‘Encanto’ Facelift

“The Happiest Cruise That Ever Sailed” is about to become the spotlight of an Encanto-themed facelift!

The Walt Disney Animation Studios film Encanto (2021) is all Disney fans can talk about it seems! The film has inspired highly sought-after Encanto merchandise, spurred a sing-along version of Encanto on Disney+, and has left Disney CEO Bob Chapek and the musically talented Lin-Manuel Miranda in talks of an Encanto attraction in the Disney Parks.

And while everyone says, “We Don’t Talk About Bruno“… the truth is that’s ALL we talk about! We’ve seen doses of Encanto make their way to the Disney Parks with Dapper Dans singing the popular Encanto song and the sweet Mirabel making character appearances in the Park. But now, the iconic “it’s a small world” attraction is about to get in on the action!

Before the panic sets in, Disney has not made any mention of touching the inside of “it’s a small world“. The hundreds of animatronic dolls are still safe as far as we know! Instead, Disney is introducing a new projection show to be presented front and center of “it’s a small world” at Disneyland Park.

Disney has announced (along with a video below), “For a limited time beginning April 11, the iconic façade of “it’s a small world” becomes enchanted several times each evening with a brief visual montage that pays tribute to the movie’s hit song, “We Don’t Talk About Bruno.”

“This musical delight comes to life through projection and lighting effects and an artistic style inspired by the lyrics, with select moments that feature characters from the film. Like the Madrigal family’s Casita, tiles across the “it’s a small world” façade flip, turn, and rearrange themselves as one scene transitions to the next, culminating in a celebratory chorus and a nod to Bruno’s mysterious prophecy about Mirabel.“

Ready to see a touch of Encanto provide an exterior facelift for “it’s a small world”? Furthermore, Encanto will also make an appearance with the return of Disneyland’s Main Street Electrical Parade.

Currently, Walt Disney World theme park has yet to release any Encanto-themed plans. With the front facade of Magic Kingdom Park’s “it’s a small world” being much smaller than Disneyland’s version, a projection show obviously wouldn’t work in Magic Kingdom. Maybe the projection show could take place on Tower of Terror at Disney’s Hollywood Studios?

We’ll keep you posted as Disney shares more about the new Encanto-themed facelift for the “it’s a small world” facade at Disneyland Resort.

2022-04-04
Jamie Sylvester
Previous: Disney Impresses With New Project Announcement
Next: The Fantasmic! Update We Did NOT Want to See