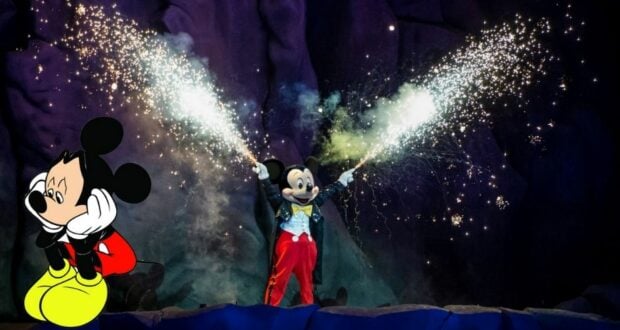 The Fantasmic! Update We Did NOT Want to See

Eager to experience the return of Fantasmic! at Disney’s Hollywood Studios? Unfortunately, it seems the reopening progress has taken a step backward.

With Disney’s Animal Kingdom removing Rivers of Light, the Disney Park is a quiet nighttime experience, although we recently suggested drones would be perfect for this Park much like Disneyland Paris!

Then there is Disney’s Hollywood Studios… which has us the most perplexed. When COVID hit, Disney put a hold on both nighttime spectaculars for the Disney Park including Star Wars: A Galactic Spectacular in front of the Chinese Theater and Fantasmic! on Sunset Boulevard.

Disney has yet to mention the return of Star Wars: A Galactic Spectacular, but they have promised Guests the return of Fantasmic! at Walt Disney World Resort in 2022. Disneyland Resort has announced Fantasmic! will return on May 28, 2022.

While Disney has said returning the show does take time, we’ve been excited to see excellent progress from aerial photos of Disney’s Hollywood Studios and the Hollywood Hills Amphitheater.

Most recently, however, April photos have captured that the once filled Fantasmic lagoon has now been drained, reminding us of the earliest stages when Fantasmic! sat dormant during COVID.

@bioreconstruct took to the sky on April 3, 2022, to share a few photos of Fantasmic’s progress. In the photo below, you’ll see the water has been drained with a large crane and flatbed trailers behind Fantasmic!

Here’s a better look at that large crane and nearby trucks for Fantasmics’ refurbishment.

But, could there be forward progress after all? A new photo does show that while the attraction has been drained (minus some accumulated rain), there is a collection of staged trash cans as shown with the yellow arrow in the photo below.

Trash cans don’t provide us with very high hopes that the Disney entertainment will be opening this Spring. Although, thankfully, Disney has proven us wrong before.

If you’ve never experienced Fantasmic! at Disney’s Hollywood Studios check out more about the attraction:

A Night When Dreams Come True

Fast asleep, Mickey Mouse dreams that he is a mighty sorcerer’s apprentice with the power to control water, color and magic. The Disney Villains—including Maleficent in the form of a towering, 40-foot-tall dragon—turn Mickey’s dream into a nightmare, but don’t underestimate the power of Mickey’s imagination!

Hang in there, Disney fans. We’ll be sure to share any Fantasmic! updates as soon as Disney announces them!