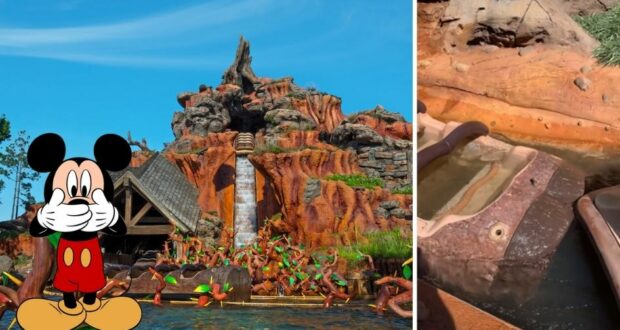 Oh boy! A ride on Walt Disney World Resort’s Splash Mountain quickly changed from a “laughing place” to a scary place as Guests were evacuated due to a sinking ride vehicle.

Disney Parks ride mishaps happen! We’ve seen ladders needed to evacuate Guests off Peter Pan’s Flight; a Cast Member giving Space Mountain a push to keep it going; a messed-up tire causing an exodus of Kilimanjaro Safaris, and even a Pirates of the Caribbean boat issue.

Frontierland’s Splash Mountain is a hot topic right now for the Disney fandom. The iconic attraction is being rethemed to The Princess and the Frog (2009) theme as Disney removes all Song of the South (1946) components from its Parks. We’ve already seen Song of the South music dropped from the now returned Festival of Fantasy Parade at Magic Kingdom.

While Disney has said they are expediting the ride refurbishment to provide for a more inclusive attraction feel, there is no official word on when the refurbishment will begin. Without knowing when may be the last time to ride the classic attraction, wait times for Splash Mountain are almost always lengthy as Disney fans scurry to the attraction in hopes of riding it with the “Zip-A-Dee-Doo-Dah” theme one last time.

Imagine visiting Magic Kingdom Park and waiting hours in line or purchasing Disney Genie+ only to find yourself quickly evacuating a sinking Splash Mountain boat as water floods in!

According to the comments, Dakota Anglin confirms the video of the sinking boat was taken at Walt Disney World Resort on Monday, March 28, 2022.

As crowds flock to enjoy Walt Disney World’s 50th Anniversary, this isn’t the first and likely won’t be the last time we see an attraction mishap at “the most magical place on Earth.” Thankfully, everyone was ok and the attraction resumed operation.