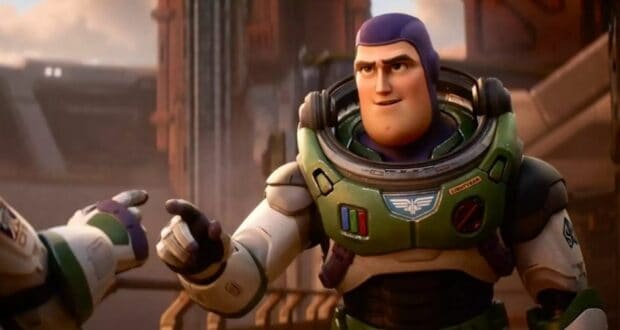 News released in the Disney Pixar film industry as we have learned the new upcoming Lightyear film to be released this summer will feature a same-sex kiss.

Pixar dropped the official trailer of the film back in February 2022 with the description, “Every hero has a beginning.” Lightyear will be the film that features the “definitive origin story of Buzz Lightyear—the hero who inspired the toy—following the legendary Space Ranger on an intergalactic adventure.”

Toy Story also has an imprint on the Disney Parks with Toy Story Land popular in select Parks which feature Toy Story-themed attractions, restaurants, and experiences. Now, Buzz Lightyear is preparing to take film followers on an “intergalactic adventure”.

According to a report Variety, recently, LGBTQ employees at Pixar Animation Studios sent a joint statement to The Walt Disney Company claiming that Disney executives had actively censored “overtly gay affection” in its feature films. The allegation has come at the height of the company’s lack of public response to Florida’s “Don’t Say Gay” bill.

The report goes on the share that Pixar’s Lightyear will have a same-sex kiss which has been once removed but now added back into the film. The kiss will take place between the female character, Hawthorne (voiced by Uzo Aduba), and a woman she is in a relationship with.

Following the response to Disney CEO Bob Chapek’s handling of the “Don’t Say Gay” bill, the kiss has been reinstated into the Pixar movie. According to the report, this decision will make this the first LGBTQ representation with a same-sex kiss not just in Pixar films, but in feature animation in general.

Here is the official trailer below:

Disney and Pixar’s Lightyear will release in theaters on June 17, 2022.