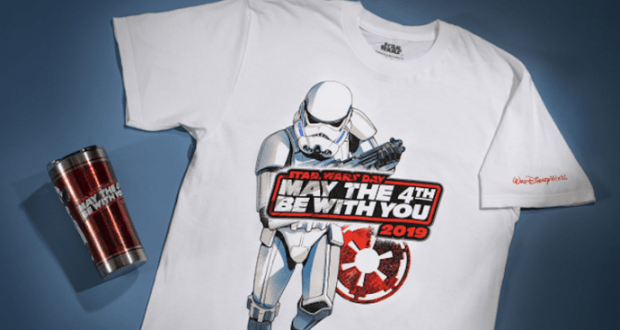 May the 4th is coming up this Saturday!  Fans have proclaimed the day as Star Wars Day.  All of the Star Wars fans out there are getting ready to celebrate a fun Star Wars inspired day at Walt Disney World and around the globe.  There will be special Star Wars merchandise available, plus a few extra park experiences for the celebration happening at Walt Disney World. Some of the merchandise will include a special Star Wars t-shirt, drink-ware and pins.  The merchandise will be available on May 4th, 2019 at Disney’s Hollywood Studios at Tatooine, Launch Bay and Mickey’s of Hollywood.  The items will also be available at Star Wars Galactic Outpost and Star Wars Trading Post in Disney Springs.  These items are only available while supplies last.

Here is a look at the limited edition pins!

We previously announced that tickets are on sale for a special Disney After Hours celebration of May the 4th, offered at Disney’s Hollywood Studios. Here is a look at some of the other Star Wars experiences to be had:

To all of our readers, May the 4th Be With You! Who else will be celebrating Star Wars Day?