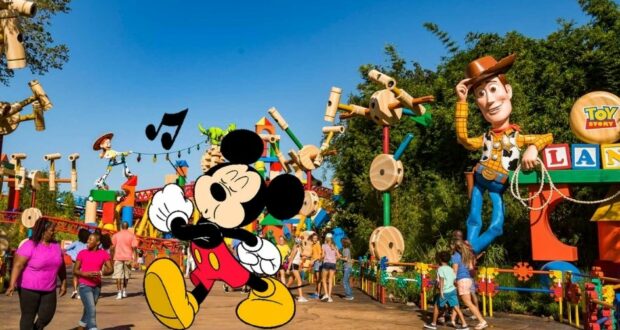 Hear that? Disney’s Hollywood Studios has been too quiet lately… but that’s all about to change!

Despite some pieces of Walt Disney World Resort entertainment still missing, live stage performances at Disney’s Hollywood Studios have returned such as Beauty and the Beast – Live on Stage and Indiana Jones Epic Stunt Spectacular.

Plus, Disney has already announced the return of normal character meet and greets soon with hugs and autographs, along with Fantasmic! returning in 2022 despite recent setbacks.

Have you noticed, however, what’s missing at the Disney Park? Take a stroll with us through the beloved Toy Story Land. Slinky Dog Dash coaster has Guests hanging on tight, Toy Story Mania is the best place for a little friendly competition, and Alien Swirling Saucers will have you saying “Oooohhh!” like those little green aliens in no time.

Green Army Drum Corps visit Toy Story Land periodically throughout the day to entertain as a talented band of drummers. Guests of all ages gather together to watch their high-energy performances and awe-inspiring drum sequences with a perfect dose of audience involvement.

Now, Disney is seeking auditions for the Green Army Drum Corps with the write up:

Disney Live Entertainment is seeking submissions from experienced Drum Corps performers for Green Army Patrol, performed at the Walt Disney World® Resort near Orlando, FL.  This three piece drum corps consists of snare, bass drum and quads.  Candidates must be proficient on all three. We will be casting for Part Time and Sub Positions.

Yes! We’re thrilled to know we’ll be able to march along with the Green Army Drum Corps soon enough!

We’ll be sure to keep you posted as we learn more about the return of the Green Army Drum Corps at Disney’s Hollywood Studios.