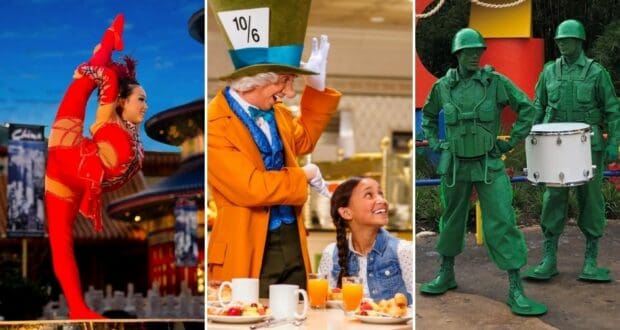 It’s wild to think it has been two years since COVID-19 first rocked our world with massive closures in March 2020. Many experiences have returned to Walt Disney World Resort, but we can’t help but think of all that’s still missing.

It seems like The Walt Disney Company used COVID as a reset button as did many companies across the globe. We have said an official goodbye to several experiences such as Spirit of Aloha at Disney’s Polynesian Village Resort, Rivers of Light and Primeval Whirl at Disney’s Animal Kingdom, the NBA Experience and VOID at Disney Springs, and even the beloved Disney’s Magical Express landed on the chopping block.

On the flip side, Disney is working hard to bring back fan favorites such as hugs and autographs as Character Meet and Greets return this month! Plus, ALL of the Walt Disney World Resort Hotels are now open as of April 2022.

Disney has revealed the soon to be returned memorable experiences such as Hoop-Dee-Doo Musical Revue at Disney’s Fort Wilderness, Fantasmic! at Disney’s Hollywood Studios, Finding Nemo: The Big Blue… and Beyond at Disney’s Animal Kingdom, along with the beloved Tumble Monkeys and Flying Birds for Festival of the Lion King.

With everything Disney currently has in the works, there is still a long list they have remained quiet on that leaves us all to wonder. Let’s dive into the lists of pre-COVID experiences still missing.

Planning a getaway to Disney World? If you haven’t visited since the Parks and Resorts phased reopening, take note as there are several experiences missed or changed.

Take a stroll with us to Disney’s Magic Kingdom Park where the magic happens! While we await the opening of TRON Lightcylce / Run which has taken over four years to construct… we’re also missing these Park memories:

Waving goodbye to Magic Kingdom, let’s head to EPCOT where the Park is undergoing a massive transformation into four neighborhoods. Plus, EPCOT’s Guardians of the Galaxy: Cosmic Rewind coaster will be opening this May. So, what’s still missing amidst the excitement?

Disney’s Hollywood Studios is keeping the crowds coming! With Star Wars: Rise of the Resistance, Slinky Dog Dash, and other fan favorites, the Park is bursting with excitement. Have you noticed these experiences however have yet to return?

Surprisingly, of all the Walt Disney World Parks, Disney’s Animal Kingdom has brought back the most experiences or at least promised the return of the Finding Nemo Musical and the full Festival of the Lion King show.

With the Disney World Resort Hotels all now open, there are still some missing pieces to the puzzle. Here are non-dining, general experiences we’re hoping to see return:

Disney has come such a long way in these past two years! We know things take time, but as Disney introduces new projects such as the Grand Floridian expansion, Polynesian Resort tower, solar power initiative, affordable housing development, and more… we can’t help but wonder when these missing Disney experiences will return.