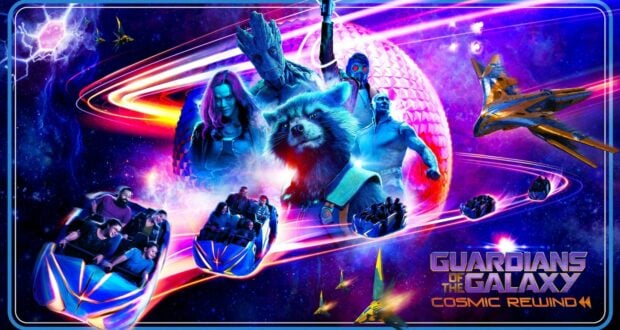 As much of EPCOT is still under construction for the four neighborhood transformations, Disney Imagineers’ hard work is paying off! We’ve seen walls erect for Journey of Water Inspired by Moana in World Nature, plus a new quick-service restaurant called Connections Cafe & Eatery will open this spring in World Celebration.

Of course, our focus right now is solely on the incredible new Disney Park indoor rollercoaster in EPCOT’s World Discovery neighborhood. Details of Guardians of the Galaxy: Cosmic Rewind have been few and far between, but we do know height requirements, the first look photos of the indoor queue, and even the gift shop that will be associated with the ride.

And now, we know the OPENING date! It seems like when the Disney Executive, Geoff Morrell accidentally leaked the grand opening of Memorial Day Weekend… he was right on! Disney Parks Blog has announced that Guardians of the Galaxy: Cosmic Rewind is set to officially debut on May 27 at EPCOT!

This Walt Disney World Resort’s family-thrill coaster will feature Guests coming from the planet Xandar to Earth to create the first “other-world” showcase at EPCOT – the Wonders of Xandar pavilion.

Technology and culture will envelop the pavilion as the two worlds collide. But wait… something unexpected happens! Check out Disney’s video below:

What did we just see? Check out the details below from Disney as they bullet point moments not to miss in the video above:

There you have it Disney fans! The Guardians of the Galaxy are on their way to EPCOT for an intergalactic chase through time and space. It all begins May 27, 2022, when the Cosmic Rewind roller coaster will wow EPCOT visitors with an attraction experience like no other!