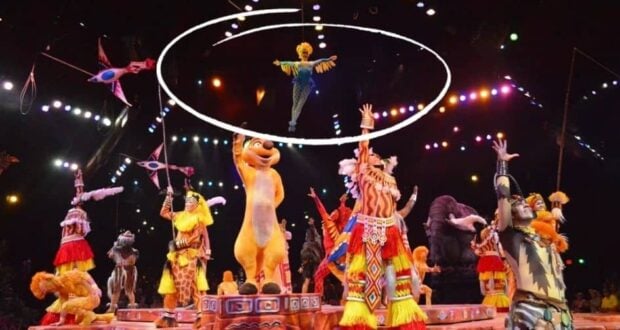 It’s an exciting time to be a Disney Park Guest! At Magic Kingdom Park Guests are once again enjoying the return of the Festival of Fantasy Parade. At EPCOT, we’re eagerly awaiting the opening of Guardians of the Galaxy: Cosmic Rewind this May. At Disney’s Hollywood Studios, the promise of Fantasmic’s return has us on the edge of our seats. And now, we have more thrilling news coming from Disney’s Animal Kingdom.

Disney’s Animal Kingdom is brimming with new and returning experiences. Expedition Everest is preparing to reopen after its lengthy refurbishment, Finding Nemo: The Big Blue… and Beyond will be opening soon, and even Disney KiteTails is preparing for a few adjustments this summer.

Of course, our focus shifts to the Africa portion of the Disney Park where you’ll find “A Celebration of the Festival of the Lion King“. This live performance returned some time ago, but with COVID precautions has been missing a few show experiences.

Currently, “A Celebration of Festival of the Lion King” is noted to be presented in a modified format “to be mindful of the current environment.” Adjustments to the show have been made onstage and backstage, including updates to choreography and temporarily pausing some show elements to allow for appropriate physical distancing.

Disney announced, “You may have seen a teaser recently about a certain group of high-flying primates making their return to “Festival of the Lion King.” It’s true! Not only will the delightful Tumble Monkeys be back to their acrobatic hijinks this summer, but the show’s iconic birds will once again soar above the stage. That’s sure to have our Guests feeling the love!”

Pre-COVID the two birds performers performed what looked like a beautiful dance as they flew through the sky within the Harambe Theater. It was a wow moment indeed and we couldn’t be more thrilled to see its return this summer.