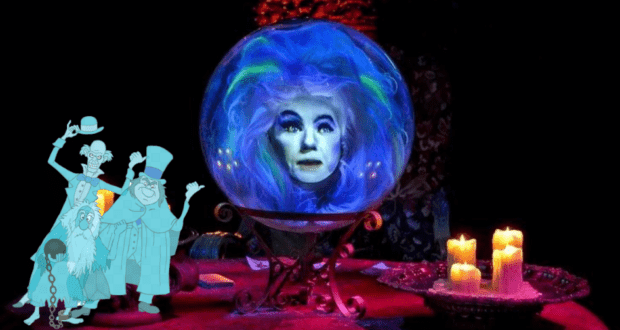 A few days ago, we shared news that upcoming Disney film Haunted Mansion (2023) named Jared Leto as the actor who would portray the iconic Hatbox Ghost. Now, we’ve got word that Disney has announced the actress who will be playing the role of Madame Leota! According to Gamespot.com, Jamie Lee Curtis will be joining the cast of the live-action film, directed by Justin Simien. Owen Wilson from Cars (2006), Rosario Dawson from The Mandalorian (2019), Tiffany Haddish, Danny Devito, and LaKeith Stanfield have already been named as actors in the movie.

In 2003, Disney premiered a different adaptation of the well-known Disney Parks ride, starring Eddie Murphy. Jennifer Tilly played Madame Leota, the ghastly gal famously known for only the top portion of her body! Madame Leota’s head remains embedded in a crystal ball where Guests at Walt Disney World Resort and Disneyland can get a glimpse of the frightening sight. In the attraction, she uses her powers to summon ghosts to join Guests inside the mansion.

Jamie Lee Curtis confirmed her part in the movie on her Instagram account with a caption that donned a simple crystal ball emoji. The original Madame Leota was inspired by Imagineer Leota Toombs.

As for the new film’s premise, Rosario Dawson plays a mom who moves into an affordable New Orleans mansion with her son. Soon after, the pair realize why the price was so low, as they begin to experience hauntings inside the mansion.

The movie is expected in March 2023, according to IMDb. Jared Leto’s version of the Hatbox Ghost will reportedly mirror the animatronic in Disneyland’s Haunted Mansion ride.

With a cast full of Disney darlings, we can’t wait to see what the Haunted Mansion film has in store for fans of the hair-raising attraction.