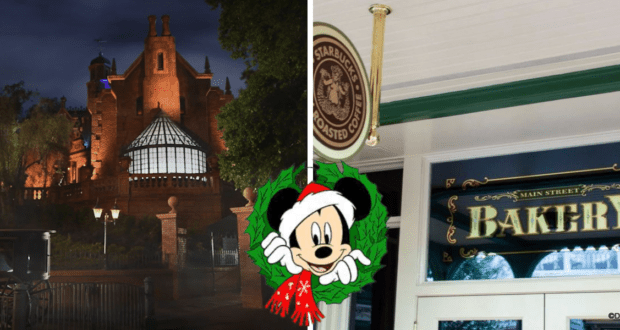 With Halloween less than 100 days away and Christmas less than 150 days away, now is the time to begin preparing for these wonderful times of the year.

We’ve recently reported about the new Disney Hallmark Christmas collection that has been released. Some of their 2022 ornaments have already been released, and more are set to be released later this month. New Disney ornaments have also recently arrived around Walt Disney World in honor of favorite Disney Park attractions, including the Magic Kingdom Train Station, Space Mountain, and Pirates of the Caribbean.

But wait, there are even more new Disney ornaments that you may just have to have! Keep reading to find out about the new Christmas and Halloween ornaments that are available to purchase online.

With the spooky season approaching, now is the perfect time to plan for your Halloween home decor. When we think of Halloween, Jack-o-Lanterns, pumpkins, leaves, and the Haunted Mansion come to mind. Some of the new additions to the Disney Storybook Ornament Collection have now got us considering a Halloween tree! Picture a black tree with purple, green, and orange accessories decorated with Haunted Mansion ornaments. Sounds spookishly delightful, doesn’t it? With this in mind, you’ll definitely want to get your hands on the following ornaments.

There are five new Sketchbook Ornaments themed after the popular Magic Kingdom attraction, Haunted Mansion, available to purchase for $24.99. Two of the ornaments are in the style of a globe: one stars the Hitchhiking Ghosts, and the other stars, Master Gracey. 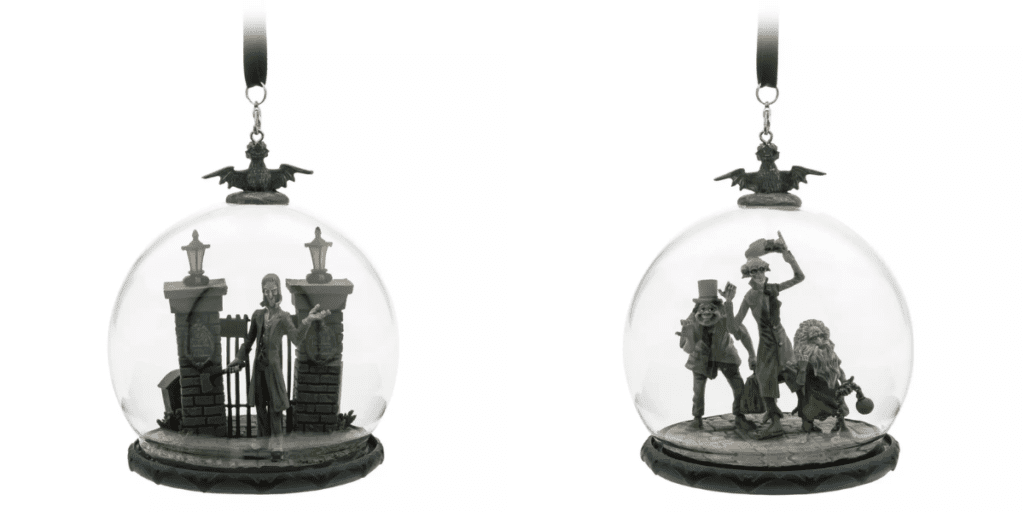 The Hatbox Ghost and the Haunted Mansion Bride are two separate ornaments that light up. Both figures are translucent and sit on a faux wood base, with the attraction logo detailing. The detachable ribbon on these Holiday ornaments allows them to be hung on a tree or freestanding on a surface.

While the final Haunted Mansion ornament is a variation of a previous Sketchbook Ornament to be released on shopDisney, this Doom Buggy has been given an upgrade. For the first time, the Hitchhiking Ghosts are translucent figures and light up, adding a wonderful feature to this Doom Buggy ornament. This will look awesome hung on a tree! 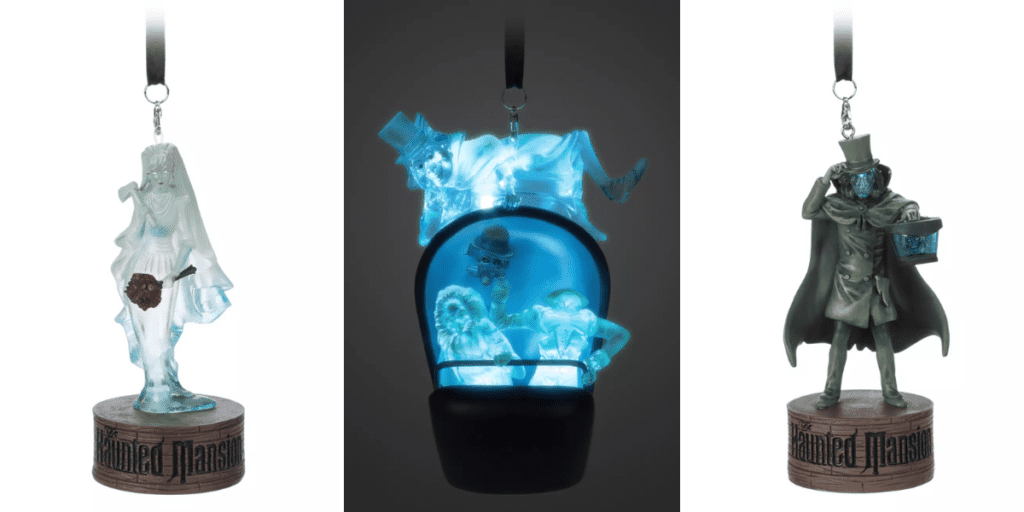 Donald Duck’s mischievous nephews are the perfect trio to be included in anything related to Halloween. This new Storybook Ornament features Huey, Dewey, and Louie dressed in Halloween costumes. With the press of a button, the ornament says ‘Trick or Treat?’ The detachable ribbon makes this Disney ornament versatile: hang it on your Halloween tree; or stand it on a shelf, bookcase, or tabletop as part of a Halloween display. It can be yours for $26.99. For the Star Wars: The Mandalorian (2019) fans out there, this new Sketchbook Ornament features Baby Yoda inside a pumpkin. And if that wasn’t cute enough, he even has his own trick-or-treat bag! It’s the perfect addition to add to a Halloween or Christmas tree! Add it to your collection for $22.99. Ask most Disney fans, and chances are, they’ll almost definitely have a strong collection of Disney Christmas tree ornaments. Don’t be surprised if they have a whole tree dedicated to Disney. There have been plenty of new ornaments added to the Disney Store Sketchbook Ornament collection this year, some that feature favorite Disney characters and others that are in honor of the anniversary of a Disney movie. Special anniversaries this year include: 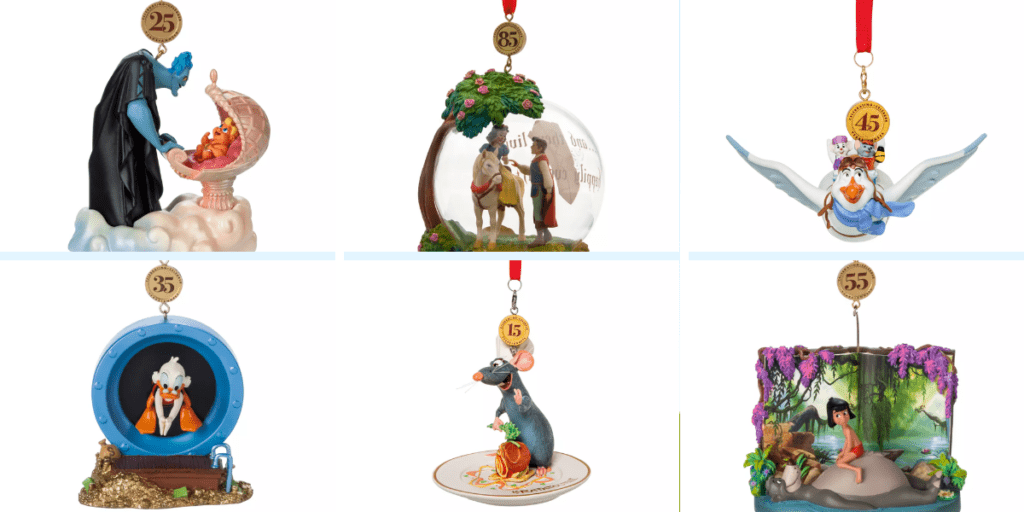 Yes, you heard correctly! There are more Starbucks Cup ornaments to add to your collection! Over the years, several versions of the Disney Parks Starbucks Cups have been released. While previous collections have featured a white cup with colored detailing, the new collection comes in a variety of colors, with a black top. Each cup is available to purchase for $17.99 on the Disney Store website, so you don’t have to wait in the long lines at the Disney Parks Starbucks locations to purchase them.

Different from other collections, the new Starbucks Cup ornaments feature Mickey or Minnie Mouse at the center of the designs. Mickey Mouse is featured on the Cups for Magic Kingdom, Disney’s Hollywood Studios, and Disney’s California Adventure. Minnie Mouse is featured on the Cups for EPCOT, Disney’s Animal Kingdom, and Disneyland. Each Cup has the Starbucks logo and the beverage order checklist on the rear. 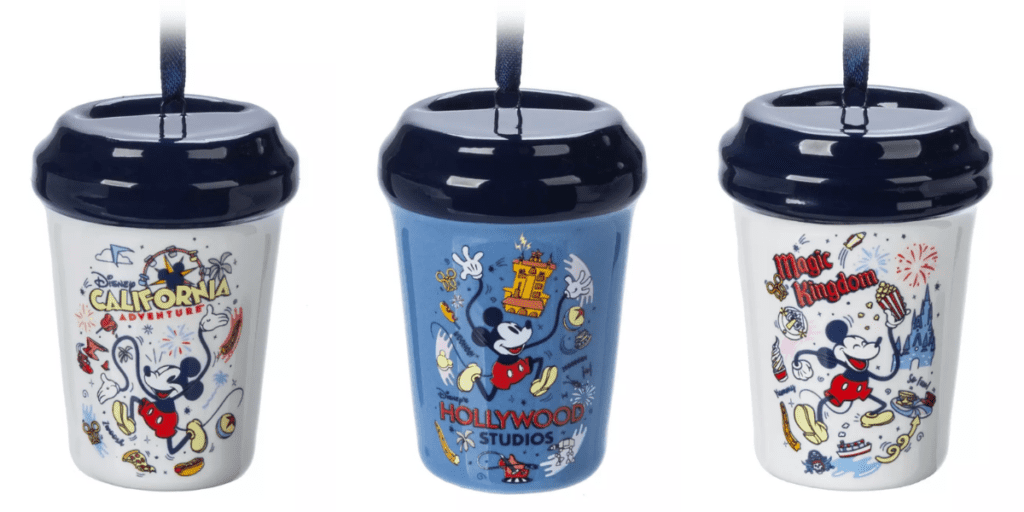 These Cups will look awesome on any size of Christmas tree, but we especially like to hang them on a small Christmas tree in the kitchen! Alternatively, you could always untie the ribbons and display them on a shelf. The Cups don’t feature a Christmas design, so they could make a perfect display all year round, especially if you have the other Disney Starbucks Cups and Mugs collections to display. 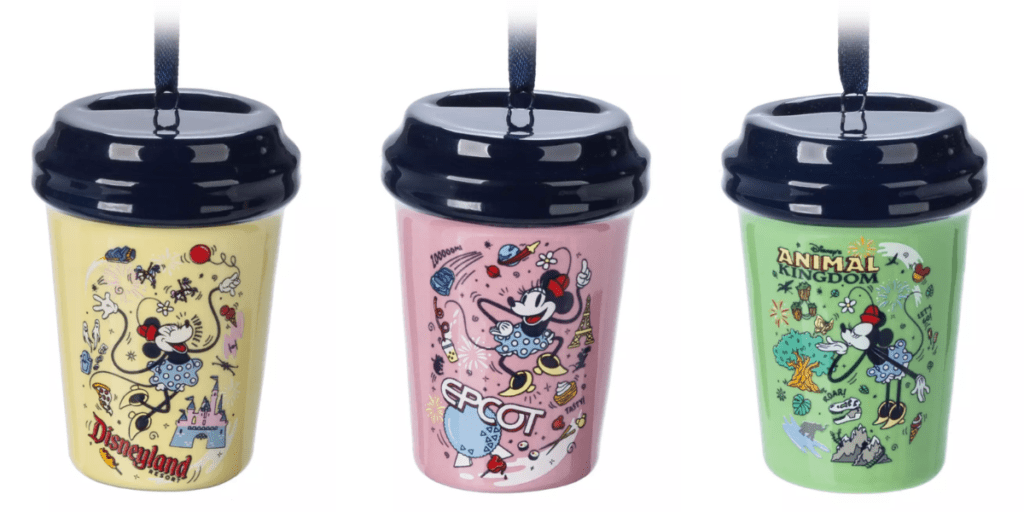 Which of the new Disney Christmas ornaments will be adding to your collection? Be sure to visit the Disney Store online and place your order before they sell out! If you find that they are sold out online, make sure to check the stores in Walt Disney World and Disneyland during your next Disney vacation. Many of the Sketchbook Ornaments are sold in the Disney Parks and Disney Springs. We recommend stopping by Ye Olde Christmas Shoppe in Magic Kingdom or Mickey’s Days of Christmas in Disney Springs if you are looking for a particular Christmas decoration.