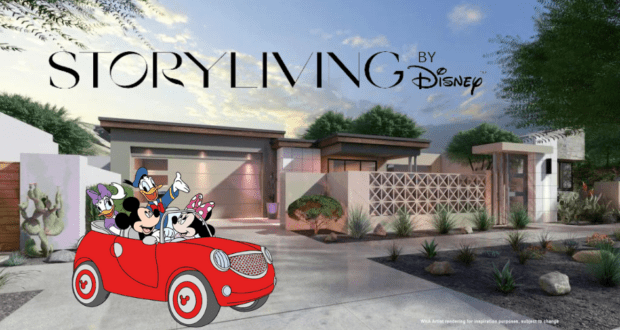 Earlier this year, Disney announced that its next venture would be the creation of new “Storyliving” communities. These exclusive communities will allow Disney fans to fully immerse themselves in Disney’s intricate theming and attention to detail full time, as they would live onsite and enjoy curated areas, amenities, and outstanding Guest service by Disney Cast Members.

While Disney plans to build multiple Storyliving communities in regions across the country, only the first location has been announced so far for Rancho Mirage, CA in the middle of the Coachella Valley. This location was selected as the site for the first new community thanks to its place in Disney history as a favorite place for Walt and Lillian Disney to retreat from the hustle and bustle of their day-to-day lives.

The Disney Parks Blog just shared the initial concept art for the home designs in Cotino, and we’ve got all the details. Walt Disney Imagineering is collaborating with architectural design firm WHA to bring the best modern designs to the community with inspiration taken from the breathtaking views of California’s Coachella Valley. The concept art featured in this post was created by Imagineers to share inspiration for the home styles with the architects working on the project. Construction on the new homes cannot begin until officials from the City of Rancho Mirage review the Preliminary Development Plan for the community created by Disney. Each of the images seen here are just a small piece of that plan, which also includes model floorplans and additional details for community amenities. The project is still in the development phases with construction on the site set to begin as soon as Disney receives approval from the City of Rancho Mirage. Ultimately the plan is to have Cotino, Disney’s first Storyliving community, open for residents to move in by 2024 with sales for the new properties set to begin next year. The new communities will also include select neighborhoods just for residents ages 55 and over, as well as experiences like wellness programming, live performances, cooking classes, seminars, and more. And, Disney is already looking at other locations across the U.S. where new Storyliving communities could be constructed in the future.

We will keep you updated here on Disney Tips as we learn more about Cotino and upcoming Storyliving communities. And in the meantime, you can always sign up to receive updates on new properties at StorylivingByDisney.com.