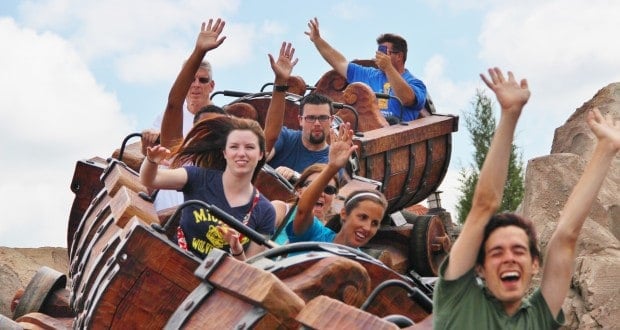 How to Feel Like a Kid Again at Walt Disney World

Decades ago, Walt Disney created a magical world that endures and continues to grow today, generations later. Part of his success was recognizing and encouraging the child in all of us. “Adults are only kids grown up, anyway”, is one of Walt’s famous quotes, and this concept is still at the core of Walt Disney World.

If you’ve ever visited WDW, you’ve undoubtedly experienced this first-hand, and revelled in feeling like a kid, regardless of your age. Here are just a few of the ways to feel like a kid again when you visit Walt Disney World.

Ditch the serious, real-world persona, and don a pair of Mickey Ears! This is perhaps the fastest way to feel like a kid at Walt Disney World.

Whether they’re glittery, rainbow, classic, or transformed into your favorite Disney character, there’s a magnificent pair of Mickey Ears (or Mickey Ear Hat, or Mickey Ear Headband…) just waiting for you. Try to frown wearing them – dare you! Guests can even find light-up Mickey Ears, for added fun after dark.

Your parents probably taught you to eat your veggies before indulging in dessert, didn’t they? Well, at Walt Disney World, there is no such rule.

Eat your dessert before your main course, or skip the veggies altogether, and eat your favorite Theme Park snack or dessert as the main course – no one will ever judge you in WDW! That being said, even vegetables tend to taste magical at Walt Disney World, so you may just end up with a new appreciation for them.

Looking for a literal cherry on top of your sweet meal? Sign up for a dessert party to celebrate Walt Disney World’s 50th Anniversary, and indulge that sweet tooth to the max.

Become a Prince or Princess

No matter your age, you won’t be called “ma’am” or “sir” when you’re in Walt Disney World. Cast Members know how important it is to be immersed in the world of Disney, and there’s no faster way to take a Guest out of the magic and back to the real world than using these titles (I know I feel ancient whenever I’m called “ma’am” in real life!).

When Guests are on property, they’re referred to by a variety of Disney-esque monikers, including Prince, Princess, Superhero, Pal, Toy, Your Majesty, or Friend, depending on the theming of the area they’re in.

Admit it – you probably have a soft spot for a specific Disney character (or three). One of the best ways to feel like a kid at Walt Disney World is to meet these characters. At WDW, character encounters aren’t just for kids!

The pandemic has prompted some changes for the safety of Guests and Cast Members, so your character encounter will look a little different than in the past. Not all character dining experiences are available right now, and for those that are, instead of Mickey visiting your table for hugs and autographs, you’ll need to take photos from a distance.

Ditto with character meet-and-greets, which have been returning to the Parks. Now called “character sightings” – Guests can meet characters in their themed areas, just at a safe distance.   You can also watch a Disney Character Cavalcade pass by at regular intervals at each Theme Park.

Staying on property during your Walt Disney World vacation? Get in touch with your inner child by enjoying a pool day at your Resort Hotel! Whether you’re staying at a Value Resort, Moderate Resort, Deluxe Resort, or Deluxe Villa Resort, you’ll have at least one pool at your disposal – most Resorts have a feature pool and smaller quiet pools.

So set aside a pool day, and have a blast shooting down water slides, floating down a lazy river on a tube, and taking part in an afternoon of Cast Member-led poolside games!

You might be worried about being judged for wearing a Mickey Mouse, Beast, or Disney Princess t-shirt in real life (although props if you aren’t!), or for wearing matching family shirts. But one place you can put those fears to rest is Walt Disney World.

So pull out all of your favorite character tees, or buy a fabulous new one, and express the Disney kid inside! You can even have matching family shirts created to wear during your Walt Disney World vacation to commemorate your time together in the Parks.

One of the magical things about Walt Disney World is that virtually all of the attractions in the Parks, even those aimed at children, can be enjoyed by Guests of all ages. You can ride a child-themed attraction – for instance, Dumbo the Flying Elephant, Peter Pan’s Flight, and Prince Charming Regal Carrousel – with or without kids.

You’ll be amazed by how many adults in line don’t have children with them. So stop worrying about whether a ride is “adult” enough, and hop aboard the nostalgia train!

The Fountain of Youth remains annoyingly elusive, but one sure-fire way to turn back the hands of time is by taking a trip to Walt Disney World. Getting in touch with your inner child is practically built in, and you may be surprised by just how magical it feels to experience life as a kid again.