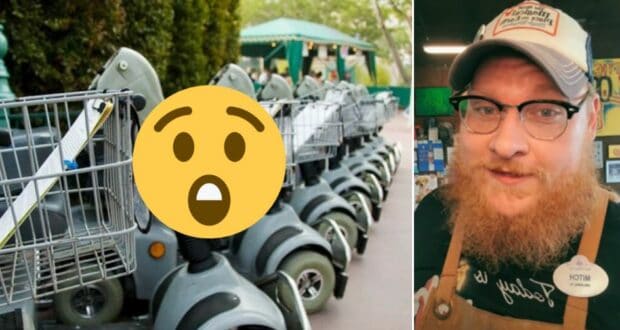 NEVER Ask a Disney Cast Member to Valet a Scooter. Here’s Why!

When visiting Walt Disney World, Park Guests can typically expect a sea of people around every twist and turn. With the sheer volume of people, navigating a stroller, wheelchair, or scooter/ECVs (Electric Conveyance Vehicles) through the Park can be extremely difficult. But, when it comes time to park such devices, one former Cast Member weighs in on why you shouldn’t be looking for a valet.

Scooters tend to be the center of much Disney Park debate. With ECVs and strollers available for rent right at the entrance of Magic Kingdom, EPCOT, Disney’s Hollywood Studios, and Disney’s Animal Kingdom Park, it’s perfectly fine for Guests to use these forms of transportation as needed to experience the massive theme park.

What isn’t ok, however, is when a Guest decides to use a stroller or scooter as a battering ram to make way through the crowds. We’ve seen videos of Guests’ feet getting run over and even a lawsuit against Disney for injuries due to scooter accidents.

RELATED: Should You Bring Your Own Stroller or Rent One at Walt Disney World?

We’ve also seen issues when it comes to stroller and scooter parking.

When experiencing a Disney ride, many attractions require Guests to park their scooter or stroller in the designated parking area. Cast Members monitor this area, and as we’ve seen in videos, some Disney fans get angry at Cast Members because of it.

A former Disney Cast Member (@dappermanatee) took to social media to share a scooter story he experienced while greetings Guests entering the attraction The Seas with Nemo & Friends at EPCOT.

Unfortunately, one Disney Guest thought this Cast Member would make for a great valet… but we’re pretty sure that Guest will never do this again! Check out the video below:

As the former Cast Member “Mitch” states in the video, don’t expect a Cast Member to be your valet driver. It sounds like when this Guest got off The Seas with Nemo & Friends, she had a long way to walk to retrieve her scooter near Mission: SPACE.

Lessons learned: One, don’t roll over Cast Members’ feet with scooters, and two, don’t expect them to park your stroller or scooter for you.

2022-09-01
Jamie Sylvester
Previous: Fans Can’t Wait To Get Up Close and Personal With These Iconic Disney Celebrities
Next: Guests Smell Burning As Disney Ride Puts Them in Precarious Position