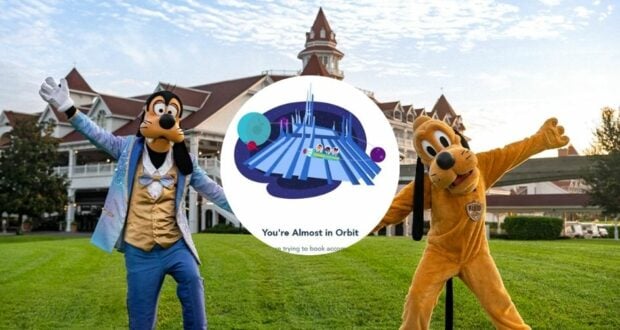 Ready to make plans for a Walt Disney World vacation? Get in line!

It’s a great time to be a Disney+ subscriber. With new films such as Encanto (2021) and Turning Red (2022) released on Disney’s streaming platform along with seemingly endless selections of Pixar, Marvel, Star Wars, and beyond… streaming those favorite Disney films and series has never been so easy.

With crowds flocking to Walt Disney World Resort to celebrate its 50th Anniversary throughout each Disney Park, Disney has decided to drop a special offer for Disney+ subscribers!

As we previously shared, Disney has revealed a “Disney+ Subscribers: Stay in the Magic and Save!” special offer which allows subscribers to save up to 25% on rooms at select Disney Resort hotel stays most nights from July 8 through September 30, 2022.

With the limited number of Disney Resort Hotel rooms allocated for the promotion, Disney+ subscribers are hurrying to the Disney website which has now caused a virtual queue for those waiting to snag the deal.

When visiting the special offers page, Guests will notice a “You’re Almost in Orbit” as shown in the screenshot below, nothing, “Thank you for your patience. Many Guests are trying to book accommodations right now, so you are currently in a waiting room. Hang in there, as you are making progress. Don’t refresh the page or select the back button.”