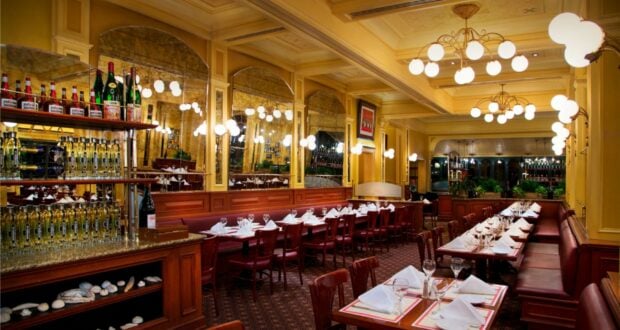 Why would anyone who isn’t a self-proclaimed Disney fan ever visit Walt Disney World, you may wonder?

Surprisingly, many of the Guests who walk the streets of Disney’s Magic Kingdom, EPCOT, Hollywood Studios, and Animal Kingdom Parks every day aren’t necessarily Disney fans. They might have a Disney-obsessed significant other determined to introduce them to the most magical place on Earth, or maybe they’re teenagers tagging along after their Disney fan parents, or perhaps they’re a somewhat reluctant member of a larger party of Disney enthusiasts.

But whatever the reason, if you or someone you know winds up in Walt Disney World as a non-Disney fan, take heart!  Disney is excellent at creating top-notch experiences for all Guests, not just those whose absolute dream is to meet Mickey Mouse in person.

Here, we explore some of the table service restaurants in Walt Disney World Parks that boast fabulous theming and delectable eats – all without an animated character in sight. Disney Imagineers traveled the globe when designing Disney’s Animal Kingdom, bringing back ideas and artifacts that inspired what Guests see today in the Park.

Dine at Tiffins Restaurant for a taste – literal and figurative – of that globetrotting spirit! Travel-inspired photos, sculptures, paintings, and sketches adorn the walls, and you can continue the adventure with an Instagram-worthy meal like Whole-fried Sustainable Fish – not for the faint of heart!

We never miss a trip to Yak and Yeti at Disney’s Animal Kingdom Park! This little gem is chock full of South Asian artifacts, vibrant colors, and beautifully carved woodwork, evoking the feel of a boutique hotel somewhere in Nepal or India. Guests will love the Pan-Asian cuisine served here! The Pork Pot Stickers are always a hit, and the Fried Wontons for dessert are simply inspired.

The sea creatures that live in The Seas with Nemo & Friends pavilion are simply mesmerizing: more than 60 species including rays, sharks, dolphins, turtles, and more swim around this colossal aquarium.

Did you know that you can enjoy a meal while enjoying this underwater world? Dine under the sea at EPCOT’s Coral Reef in World Nature, where you’ll be treated to panoramic views of The Seas, and the 2000 creatures that call it home. The cuisine here features globally-inspired seafood and gourmet dishes. 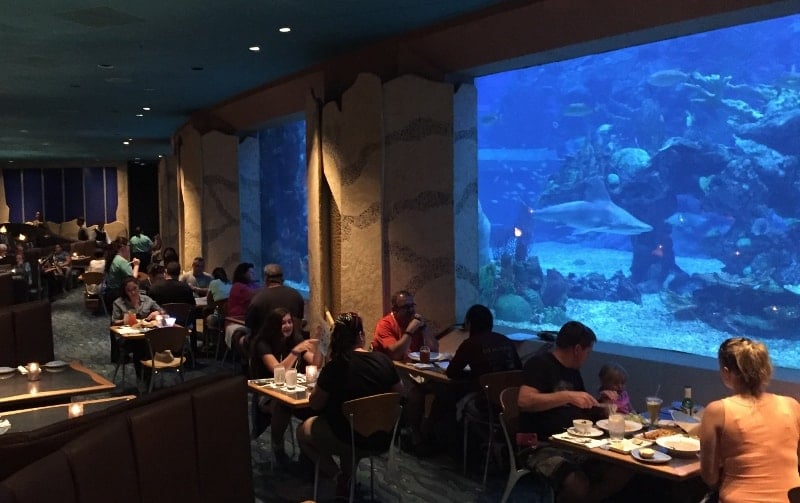 Aside from the odd Hidden Mickey floating by outside the window, there’s nothing “Disney” about Space 220 at EPCOT’s World Discovery.

Board a space elevator and watch the world recede as you ascend to a space station, where you’ll enjoy a gourmet meal gazing out at a panoramic view of the cosmos and Earth far below you. Meals are prix-fixe and pricey, even for a table service restaurant at WDW. Guests can opt to eat at the Space 220 Lounge for a more reasonably priced adventure with a la carte options.

There’s really no bad option for dining at the World Showcase in Disney’s EPCOT Park! Most pavilions boast table service restaurants that showcase the culinary delights of that country, and Cast Members here hail from the country depicted.  Step into a traditional British pub at the United Kingdom Pavilion’s Rose & Crown Dining Room, learn a few Chinese phrases at Nine Dragons in the China Pavilion, enjoy a taste of Canada at Le Cellier Steakhouse, or dine inside a Mayan temple at the Mexico Pavilion’s San Angel Inn, for starters.

There’s not a cartoon character nor animal animatronic in sight at Magic Kingdom’s Skipper Canteen, although this unique restaurant is inspired by the Park’s Jungle Cruise attraction.

Guests will find some of the most adventurous eats on Disney Resort property right here! Latin American, African, and Asian cuisine is offered, including Curried Vegetable Crew Stew, Kungaloosh!, and Orinoco Ida’s Cachapas. Bring your appetite, your curiosity, and your tolerance for “dad jokes”.

Tony’s Town Square, serving classic Italian favorites, manages to fly under the radar in Disney’s Magic Kingdom, and we didn’t discover it until just a few years ago. It’s ostensibly the spot where Lady and the Tramp shared their famous animated kiss, but there’s nothing Disneyfied about this charmingly classy eatery once you get past the lobby.

Tony’s Town Square enjoys an ideal location near the Park’s entrance, and you can dine inside or on the porch, especially recommended during the holiday season when you’ll have the perfect view of Magic Kingdom’s massive Christmas tree!

Nostalgia reigns at the Sci-Fi Dine-In Theater Restaurant in Disney’s Hollywood Studios. You’ll eat under the stars in a retro car-shaped booth while you watch clips of vintage sci-fi and horror scenes on the screen. There’s even a vintage-style concession stand.

The 1950s-era fun continues with the food, which is comfort food at its best. Dive into the Oven-Roasted Turkey Sandwich, enjoy some Crispy Onion Rings, and treat yourself to a House-made Sci-Fi Candy Bar.

A replica of the legendary Brown Derby in Hollywood, this table service spot in Disney’s Hollywood Studios is perfect for film lovers! The walls of Hollywood Brown Derby are brimming with caricatures of celebrities, just like the original restaurant in Los Angeles.

Try the Cobb Salad (originally created by the owner of the restaurant’s California counterpart), and for dessert, you can’t go wrong with the Grapefruit Cake, another signature dish.

A vacation to Walt Disney World can be a hard sell if you’re not a Disney fan.  But there are plenty of table service restaurants in Disney Resort theme parks that will surprise you, not only with their amazing non-Disneyfied theming but also their creative and yummy cuisine.

2022-03-23
Stacy Milford
Previous: You Just Got Married! Time to Pack for Your Disney Honeymoon
Next: Not a Disney Fan? Try These Rides in Walt Disney World’s Theme Parks