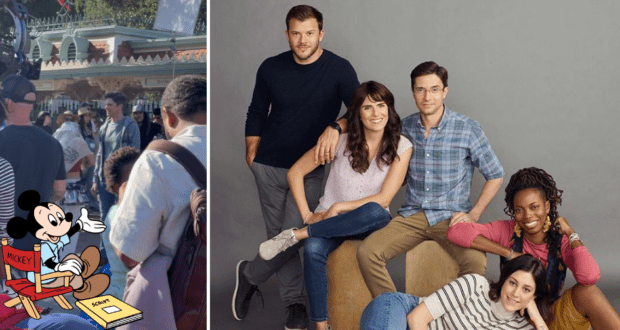 Disney Parks are a popular spot for TV shows and movies to film on location. With Hollywood and Los Angeles in close proximity, Disneyland Resort often surprises unknowing Guests with film shoots taking place unexpectedly in the middle of their vacation!

You never know what you’ll see on a trip to Disneyland Resort! From interviews to performances to filmings, celebrities can be spotted quite often at the Happiest Place on Earth.

Recently, Disney fans took to social media to share footage of a television show shooting around different locations in Anaheim. The TV program is called “Home Economics” and is viewable on Disney’s ABC.

American actor Topher Grace stars in the sitcom and was spotted shooting a scene at the entrance to Disneyland Park. Camera equipment and a group of curious onlookers surrounded the cast as they went about their business.

Another TikTok video showed the crew filming at a different spot inside the Park. A large white backdrop was spotted between “it’s a small world” and Matterhorn Bobsleds.

Someone in the comments section, @nailsxpixiedust noted, “My boyfriend is working that shoot.” Cast Members can often be seen surrounding celebrities at the Parks, with Guests usually incredibly respectful in giving them their space.

“Home Economics” premiered in April 2021 and was renewed for a second and third season, with the latter scheduled to arrive next month. The series follows the Hayworth family, which is comprised of three adult siblings.

Tom Hayworth, played by Topher Grace, is a failed novelist who is married and has three children. A self-proclaimed Disney fan, Grace recently took part in a podcast for D23 where he dishes about how Disney inspired him to move to Hollywood, among other interesting topics. 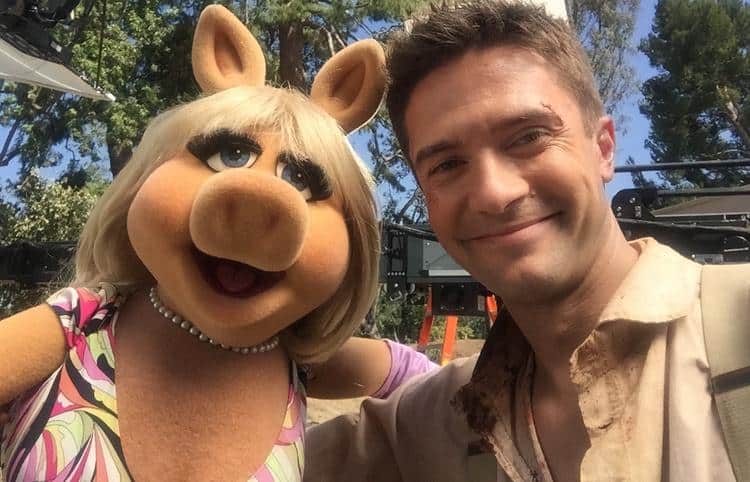 The actor previously appeared in the pilot episode of ABC’s TV show “The Muppets” and discussed his experience on that project as well. It’s always fun to spot a familiar face at Disney Parks. When Guests respectfully give celebrities their space, it makes for a fun memory and a healthy environment for everyone.

2022-08-22
Christy Weinberg
Previous: Refurbishment Dates Confirmed for One of Disney’s Most Popular ‘Frozen’ Attractions
Next: Disney World Has Finally Updated the Park Pass Reservation System for the Better