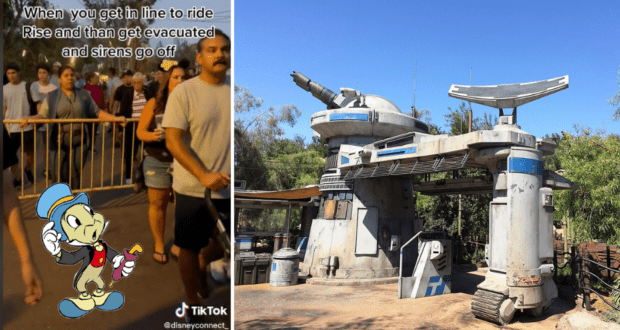 A popular attraction in Star Wars: Galaxy’s Edge recently experienced an emergency evacuation. Star Wars: Rise of the Resistance is the newest addition to Disneyland’s Batuu, arriving in January 2020, several months after the planet opened to Guests. Star Wars: Rise of the Resistance is unique because it boasts several different ride systems, making it more susceptible to breakdowns. A Guest of Disneyland Resort, @disneyconnect, posted a video on TikTok showing an unexpected incident that occurred while they waited in line.

Captioned, “When you get in line to ride Rise and than get evacuated and sirens go off.” As the video opens, sirens can already be heard, with lights flashing on and off, as Guests evacuate the ride.

No one seems worried in the video, although the sound and visuals are rather alarming. Despite the interruption, Guests can be seen casually strolling out as they look at their cell phones.

Several Disney fans took to the comments section to describe their experiences at the attraction. User @heyitsmaddie.05 commented, “I was waiting in that line for 75 minutes, and then we sat down to go on the ride but then it shut down.”

This is not the first time the ride has experienced malfunctions. One user, @zz.dxddyy, shared, “That has happened three different Disney trips.” Apparently, this particular attraction is known to be problematic. So, what was the cause of the evacuation? The TikTik user that posted the video explained, “It was pretty crazy I think there was a Medical emergency.” Near the end of the video, a Cast Member can be seen with a gate, forcing Guests out of the area.

The TikTok user also stated that the entire entrance was evacuated after they were asked to exit the line. It’s always frustrating to have to evacuate a ride after a long wait, but we hope whoever was involved in the emergency is okay.