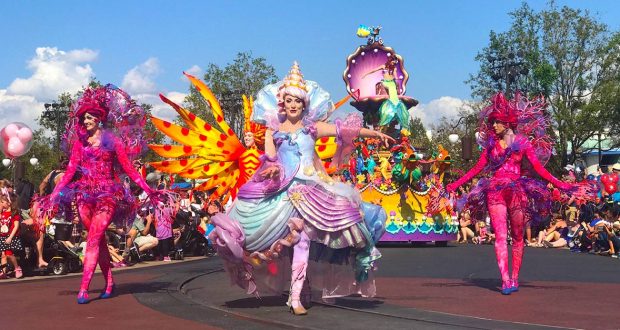 One of the most beloved attractions in all of Walt Disney World is the world famous Jungle Cruise in the Magic Kingdom’s Adventureland. Guests who board the attraction take to the exotic rivers of the world for a cruise that is daring, corny, and full of beautiful scenes. Each boat on the attraction is manned by a skipper who continuously tells corny and sarcastic jokes throughout the journey. Jungle Cruise skippers get to test out their humor, explore exotic locations, and come face to face with the perils of the jungle each day at work making it a pretty exciting job.

An exciting job that many Cast Members get to enjoy is working as a performer in the daily parades. Each parade features massive floats depicting classic places and characters from Disney films, but there are plenty of performers in between the floats keeping guests entertained. From dancers to acrobats, the performers in parades have a pretty exciting job at Disney.

Like the performers in the parades at Walt Disney World, another exciting job which Cast Members must greatly enjoy is portraying face characters. Face characters are those who are not wearing masks and have their faces exposed. For example, face characters include the Disney Princesses, Aladdin, and Tinkerbell. Cast Members who portray face characters have to have an amazing time at work each day directly interacting with guests and helping to bring the magic to life.

One of the most popular attractions in Walt Disney World can be found in the Magic Kingdom’s Liberty Square. The Haunted Mansion invites guests into Gracey Manor where nine hundred and ninety nine happy haunts socialize and cause some eerie special effects. The Cast Members who are lucky enough to work at the attraction are decked out in elaborate butler and maid costumes which are formal but have an aura of creepy to them. The Cast Members who work at the Haunted Mansion have exciting jobs as they truly enjoy creeping out guests and working in a classic attraction.

Like the butlers and maids at the Haunted Mansion, the bellhops at The Twilight Zone Tower of Terror have very exciting jobs. The attraction can be found in Disney’s Hollywood Studios on Sunset Boulevard and invites guests into the Hollywood Tower Hotel where five guests disappeared into The Twilight Zone years ago. Guests soon find themselves heading towards a similar fate after being led by creepy bellhops through the lobby, library, and boiler room into rickety old service elevators. The bellhops at the attraction love spooking guests and they get really into their rolls!

Disney’s Animal Kingdom is home to an attraction which brings guests into the Harambe Reserve for a two week safari through the jungles and savannahs of Africa. Kilimanjaro Safaris brings guests on an amazing journey full of interactions with live animals like lions, cheetahs, hippos, and giraffes. Cast Members who drive the safari vehicles on Kilimanjaro Safaris have one of the most exciting jobs in Walt Disney World as they get to enjoy the beautiful Harambe Reserve all day and spot exotic and beautiful animals.

No trip to Walt Disney World is complete without a ride on the monorail and many guests don’t think about how exciting it must be to drive one of the monorail trains. The Cast Members who get to drive the monorails have beautiful and unobstructed views of the Magic Kingdom, Epcot, Seven Seas Lagoon, Disney’s Contemporary Resort, Disney’s Polynesian Village Resort, and Disney’s Grand Floridian Resort and Spa!