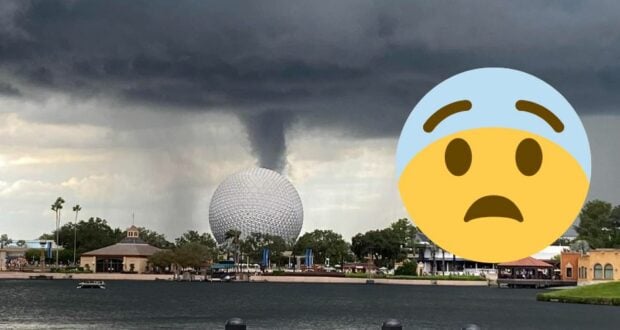 News is hitting social media this evening of a tornado touching down at Walt Disney World Resort on Thursday, September 15, 2022. Photos capture the funnel cloud and heavy rain looming in the distance over EPCOT’s iconic Spaceship Earth.

RELATED: What Happens When a Tornado Hits Walt Disney World?

Severe weather is nothing new to Central Florida, but when the funnel cloud looks this defined and dangerous, it easily gets the attention of Disney Park Guests.

Andrew Klatt took to Facebook to share the extremely ominous theme park photo above, along with Daniel R. posting to Facebook another image at EPCOT with the tornado in the distance.

RELATED: Things to Know About the Weather at Disney World

Furthermore, @LittleShellder took to social media to include a photo but also provided an update:

Thankfully, it sounds like the funnel cloud did not produce any damage or issues for Walt Disney World Resort. She further notes in the comments, “It went away! Now it’s just a thunderstorm.”

RELATED: How to Prepare For Rain in Disney World

Video of the funnel cloud near EPCOT was captured below:

In the case of a tornado at Walt Disney World, Cast Members are trained to direct Guests to a safe location for shelter during the storm. If you are not in direct contact with a Cast Member, it is always best to go to a space with no windows at the lowest point possible.

Whether it be a restroom or Cast Members guiding Guests down to the utilidors, it is a smart decision to take coverage rather than be sorry. Of course, we feel like in the “Disney bubble,” nothing could happen to a Disney fan. Still, being that Walt Disney World is located in the heart of Central Florida, severe weather is inevitable, and it’s best to know your options in an emergency.