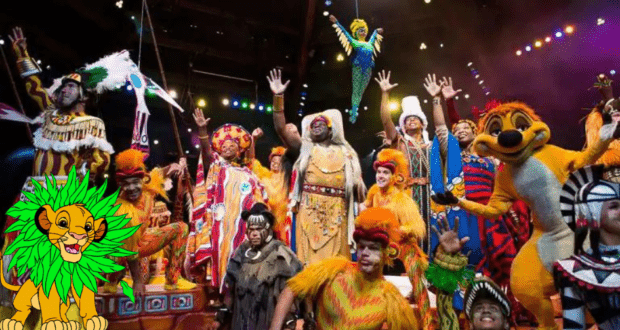 We’ve got good news for fans of the Festival of the Lion King Show at Disney’s Animal Kingdom Theme Park. The full spectacle returns to the Harambe Theatre today, including the iconic tumble monkeys and flying birds.

Prior to this, the show performed an incomplete version, entitled ‘A Celebration of Festival of the Lion King’, which closed on the fourth of July. The musical takes place in a round circus-like orientation. The presentation features music, dancing, and puppetry in celebration of the classic Disney animated movie, The Lion King (1994). A significant part of the show includes sweeping performances from two acrobatics teams.

The tumble monkeys and the flying birds perform beautiful sequences of floor and aerial maneuvers, that delight fans of all ages. With colorful costumes, the lead characters in Festival of the Lion King are played by humans, except for Timon, who plays himself. Some of the beloved songs in the show include “Be Prepared,” “The Circle of Life,” and a unique rendition of “The Lion Sleeps Tonight.” The forty-minute arrangement plays like a mini musical theatre performance and is quite popular with Guests, so get there early (at least thirty minutes) as seating will be limited. While waiting, kiddos can check out the Play Disney Parks App to make the time go by faster. Festival of the Lion King is one of the experiences Guests can earn digital achievements from. Other achievements can be attained within Walt Disney World Resort and even at home.

Lightning Lane will be available via Genie Plus, so head to the My Disney Experience App to book your performance. There are eight showtimes available for the musical revue, which take place on the hour, every hour from 10:00 a.m. to 5:00 p.m.

It’s so exciting to see some of our favorite attractions return in their complete form to Walt Disney World Resort. Keep them coming, Disney!