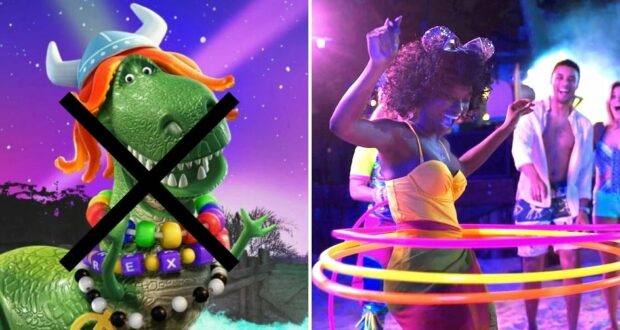 We may just be welcoming Spring, but that doesn’t stop us from talking about all things SUMMER at Disney! Time to make those Summer plans with new details revealed for a fan-favorite after-hours summer party at Walt Disney World Resort.

We previously shared the exciting news that Disney’s Typhoon Lagoon Water Park will once again be welcoming the return of H20 Glow After Hours. With details that were few and far between, Disney is now dishing out dates and information about what the party will offer.

Disney has announced that the H20 Glow After Hours will take place between 8-11 pm every Saturday night from Memorial Day Weekend (May 28) to August 27, 2022. The Disney Water Park event offers 3 hours of fun with an extra dose of GLOW! Even though the party begins at 8 pm, Guests with the H20 Glow ticket will be allowed to enter Typhoon Lagoon as early as 6 pm.

The after-hours party will offer unique, vibrant décor, high-energy DJ dance parties, exclusive glow-themed menu offerings and so much more. Imagine your favorite watery attractions glowing under the stars, with shorter wait times and more time to enjoy. Whether you’re shooting down Crush N’ Gusher, making a splash in the Surf Pool, or showing off those groovy moves on the dance floor, you’ll experience this storm-strewn paradise in a whole new light. You’ll even receive a glowing wristband and tasty snacks like popcorn and select ice-cream treats to enjoy throughout the evening!

Interestingly enough, it looks like the former Toy Story (1995) theming with Rex as the leader of the fun may be a thing of the past? In the past, the glow night has been inspired by the popular Toy Story short, Partysaurus Rex (2012) where Rex breaks away from his natural nervous disposition and becomes a party sensation when left with bath toys.

The current photos however of 2022 H2O Glow After Hours don’t show any sign of Toy Story characters such as Rex, Buzz Lightyear, Woody, or Jessie. Plus, the write-up above excludes mentioning any character greeting or Disney characters in the new details.

Pricing for the after-hours event for Adults (ages 10 and up) is $75 plus tax. Children (ages 3 to 9) are $70 plus tax. Passholders and Disney Vacation Club Members can purchase specially priced tickets for $59 per adult or $54 per child.

This is actually much better pricing than we were expecting for the Disney experience! In 2020, H20 Glow Nights were priced at $65 per person. We’ve seen events like the former Mickey’s Very Merry Christmas Party result in more expensive pricing for Disney Very Merriest After Hours, so we’re thrilled this one didn’t see a massive price hike!

Ready for some extra special Water Park fun? Keep in mind, at this time Blizzard Beach Water Park remains closed for refurbishment. It sounds like Disney’s Water Park summer focus is leaning on Typhoon Lagoon. We’ll wave as we float by on the lazy river!