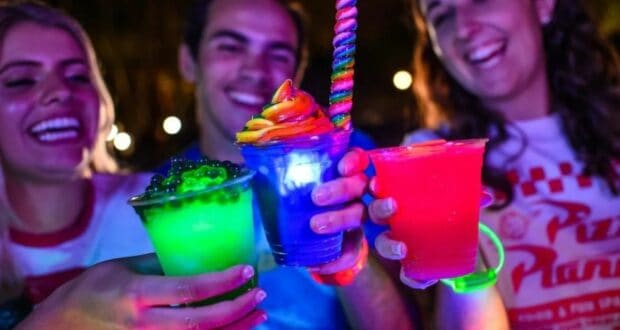 We’re eagerly awaiting the return of Fantasmic! at Disney’s Hollywood Studios, although Disney has confirmed it will return in 2022. Plus, Tree of Life Awakenings at Disney’s Animal Kingdom and the Beacons of Magic at all four theme parks are wowing Disney Park Guests daily.

Now, Disney Water Parks are getting in on the action. While Disney’s Blizzard Beach Water Park is currently closed for refurbishment, we’re thrilled to hear the exciting news that a fan-favorite nighttime experience is returning at Disney’s Typhoon Lagoon Water Park!

What exactly are H2O Glow Nights… and why is Rex from Toy Story (1995) dressed like that?

First of all, H2O Glow Nights are special ticketed events that welcome Disney fans to enjoy some fun at Typhoon Lagoon after-hours. That’s right, a Water Park at NIGHT! At close, the Park “glows wild”.

Disney describes the event with “Slide into the fun at this supercharged after-hours celebration overflowing with excitement for the whole family. After the Park closes to the general public, get ready to “glow wild” at Disney H2O Glow Nights, where you’ll have access to all available attractions—with shorter wait times—plus:“

And why on earth is Rex dressed that way? Well, in the past, the night has been inspired by the popular Toy Story short, Partysaurus Rex (2012) where Rex breaks away from his natural nervous disposition and becomes a party sensation when left with bath toys. Here’s a clip below:

Disney has yet to announce when tickets will go on sale for 2022 or when the party dates will be offered, but we do know based on the history of the after-party, party dates could be held beginning late May.

Tickets went on sale in January for the 2020 Disney H2O Glow Nights with party dates later canceled because of the COVID pandemic. The event was scheduled to take place on select nights from May 27, 2020, to August 29, 2020, between the hours of 8 pm – 11 pm. Guests attending the party, however, could enter Typhoon Lagoon as early as 6 pm on event nights.

In 2020, Disney offered a special discounted price of $65 for H2O Glow Nights. With the increase in pricing for after-hours events such as the former Mickey’s Very Merry Christmas Party to more expensive pricing of Disney Very Merriest After Hours, we suspect we may see a ticket price increase for this event as well.

This event truly makes for a memorial night to enjoy for all ages, with special Disney food, character greeting moments (such as Buzz Lightyear!), and more! We’ll be sure to keep you posted as we learn more about 2022’s Disney H2O Glow Nights.