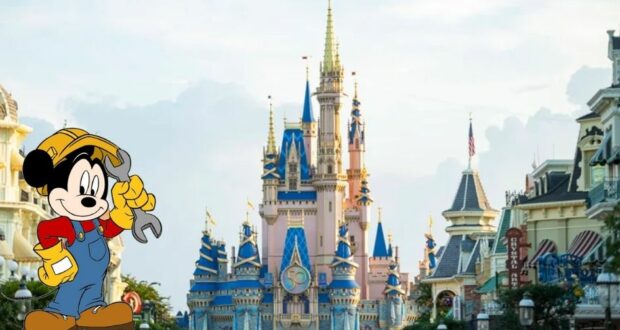 As you venture to the Disney Parks to enjoy new and returning experiences such as the Festival of Fantasy Parade’s return at Magic Kingdom Park or snack your way through the EPCOT International Flower & Garden Festival, April is ready to welcome Guests to its Parks and Resorts.

Whether you’re visiting for Spring Break or Easter festivities, you’ll want to take note that some Disney experiences may be undergoing refurbishment. Here’s our rundown of the refurbishments you can expect at Walt Disney World for April 2022.

Disney’s Blizzard Beach closed for refurbishment on January 1, 2022. Disney has yet to reveal a reopening date, but that doesn’t mean the Water Park fun has to end! Disney’s Typhoon Lagoon Water Park is currently open and preparing to roll out the return of the special after-hours event, H2O Glow Nights, in the near future.

No huge surprise here! The Walt Disney World Railroad at Magic Kingdom Park has been closed since December 3, 2018, due to the construction work for a highly-anticipated attraction coming to the Tomorrowland portion of the Park. While TRON Lightcycle Run has taken longer to build than the Magic Kingdom Park itself, we’re hoping Disney can soon reopen the Railroad as progress moves forward on the Tron coaster construction.

We’re missing the Yeti! One of Disney’s Animal Kingdom’s most iconic attractions, Expedition Everest – Legend of the Forbidden Mountain, is currently undergoing a lengthy refurbishment. Disney has the attraction listed on the coaster’s landing page as being closed “From January 4 through mid-April 2022”.

BUT – on the refurbishment calendar Expedition Everest is listed through April 30, 2022, with its removal from the refurb calendar as of May 1, 2022. Sadly, Disney has also shared the news that the massive Yeti animatronic (known as “Disco Yeti”) is not being fixed. The refurbishment focus is reportedly on the ride control system.

With the EPCOT International Flower & Garden Festival well underway through July 4, 2022, crowds are flocking to the theme park to snag all the special merchandise! As you stroll EPCOT’s World Showcase and reach the Morocco Pavilion, take note that the small but fan-favorite gift shop known as Souk-al-Magreb is still closed for refurbishment.

The shop was originally scheduled to be closed through February 5, 2022, but the refurbishment was largely extended. Currently, Souk-al-Magreb is on the refurbishment calendar through April 23, 2022, which leaves us to believe we will be able to shop here once again beginning April 24, 2022.

Disney also notes that Guests may see and hear construction noise while the refurbishment on the Samawati Springs Pool is underway. Noise is put on hold however between dusk and 9:00 am.

One of Disney’s most Deluxe Resort Hotels, Disney’s Grand Floridian Resort & Spa is currently undergoing construction. The Resort is rolling out new Disney Vacation Club Villas which means several Resort rooms are undergoing a transformation as of March 1, 2022.

Guests can expect to hear construction during daytime hours, but most of the Grand Floridian’s amenities remain as usual, including the soon-to-be returning Victoria & Albert’s restaurant. Disney has announced the new DVC Villas should be available by Summer 2022.

As we have tackled the April Walt Disney World refurbishments, we’re looking forward to new and returning experiences coming on the horizon!

As EPCOT undergoes its transformation into four neighborhoods, the Disney Park will soon welcome its newest quick-service restaurant, and the Starbucks location called “Connections Cafe & Eatery” is preparing to open “Spring 2022”.

The highly-anticipated Guardians of the Galaxy: Cosmic Rewind coaster at EPCOT is scheduled to open in “Summer 2022”. Recently, a Disney Executive leaked the grand opening of Memorial Day Weekend!

We’re also seeing construction photos of the “Journey of Water, Inspired by Moana” attraction begin to take shape in EPCOT’s World Nature neighborhood. No opening timeframe has been provided for this one just yet!

Over at Disney’s Animal Kingdom Park, Disney has announced Finding Nemo: The Big Blue and Beyond will open this year. No specific dates were given, however, but we’re keeping our fingers crossed a Spring-time opening is in the works.

The beloved Fantasmic! at Disney’s Hollywood Studios is also making a grand return. The exceptional nighttime entertainment has been sorely missed. Disney hasn’t said when we can expect to watch Sorcerer Mickey work his magic against Disney Villains but they have promised 2022!

Plus, let’s not forget to add that “The World’s Most Magical Celebration” at Walt Disney World Resort will continue throughout 2022. The celebration of the 50th Anniversary is filled with special events, characters, food, merchandise, and more.

As always, take note that the refurbishment schedule is never set in stone. Disney has been known to extend refurbishments, shorten them, and even close attractions and/or shops suddenly for refurbishment. Check the My Disney Experience app for the latest Park closures, hours, and more. We’ll be sure to keep sharing the latest information as we welcome April!

2022-03-23
Jamie Sylvester
Previous: Not a Disney Fan? Try These Rides in Walt Disney World’s Theme Parks
Next: Grab Your Tissues! Here Are Disney Scenes That Always Make Us Cry