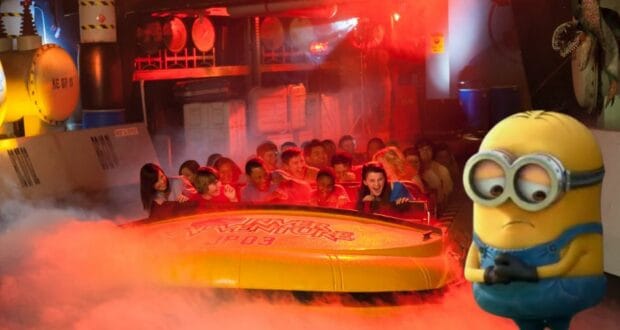 Walt Disney World Resort is currently closed as Hurricane Ian tore through the Sunshine State on September 28, 2022, and into the morning of September 29. Other theme parks throughout Orlando closed in preparation for the storm as well. Sadly, an iconic Universal Orlando Resort attraction experienced massive damage.

As Florida residents and Guests wake, videos and photos are surfacing of the impact the now Tropical Storm Ian had on the state. While there have been reports of some flooding at Walt Disney World Resort, we see even more intensive damage outside the Disney bubble.

Orlando flood videos are hitting social media, and there are now talks that Disney is deciding to close an additional day on Friday, September 30. We suspect Univeral Orlando Resort will need to extend its closure as well, as a photo shows the damage to the iconic attraction, Jurassic Park River Adventure show building:

Sadly, there is a massive hole in the side of the Universal attraction. With Universal Orlando Resort Guests unable to enter the Park, we only know of the damage we can see from afar. We hope the damage can be fixed quickly for Universal’s iconic attraction and that other damages are minimal compared to this one.

“It’s Lunchtime and You’re on the Menu. One minute, you’re gliding along in your raft. The next, you’re face to face with a giant T. rex. There’s nowhere to turn. She’s bearing down on you and your only escape from her razor sharp teeth is to take the pitch-black plunge before you. Did we mention it’s an 85-foot drop?”